1950s Rubber Doll with Bun and Others


This 10-inch rubber doll is marked with an "A" on the lower mid-back.  There are two unclear letters on the head before the numbers 44 and 12.  Illegible letters followed by "1" are underneath her right foot, and TP-10 is underneath the left foot.  The doll's manufacturer is unknown.


She has a jointed neck and a one-piece stuffed rubber body, arms, and legs.  Her hair is molded in a bun-with-bangs style that was popular for girls during the 1950s.


She has the sweetest face with side-glancing black painted eyes.  Her closed mouth is painted red.  With the exception of her molded-on panties, socks, and shoes, she was probably sold nude to be dressed by her original 1950s little mama. 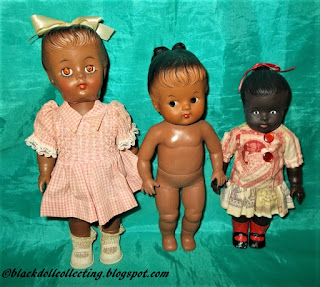 The new girl is photographed with other rubber dolls with molded hair.  The doll on the left was made in the 1950s by Allied Eastern and bears their "AE" mark.   Her bun and the new girl's bun are almost identical.  The AE doll, however, is made of vinyl.  The doll on the right is also unmarked.  She has a ponytail.  She arrived with missing eyes.  I painted the sclerae white and glued a tiny black quilting pin into each eye socket for pupils. 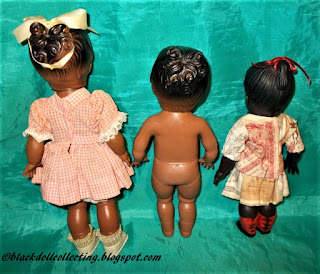 These three show off their molded buns and ponytail in this photo.

The newest girl might have been styled after Sun Rubber's 1950s Tod-L-Tot, the doll shown with her above.  Both dolls have molded-on undies, socks, and shoes.  Tod-L-Tot's body is not stuffed. 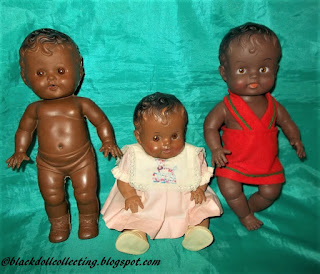 In this final photograph, Tod-L-Tot and So-Wee (a baby doll by the Sun Rubber Company), are photographed with a doll that was probably fashioned after So-Wee as their face sculpts are quite similar as is their molded curly hairstyle.  The redressed red-suspender-skirt-wearing baby has a darker complexion than So-Wee, a one-piece body, and a jointed neck whereas So-wee has five points of articulation.  Her manufacturer is also unknown. If memory serves me correctly, the doll in the red skirt was purchased from a Canadian seller where the doll might have been made.

I enjoy adding these dolls to my collection because they were made in the decade in which I was born.  Had these brown-skinned versions been readily available in my area, I might have owned them as a child.