Tropi-Cutie is shown still attached to the box liner with cello removed.  She arrived wearing her pink halter dress, which has a floral-print skirt.  She wears a gold tone bracelet and lavender sneakers on her flat feet. 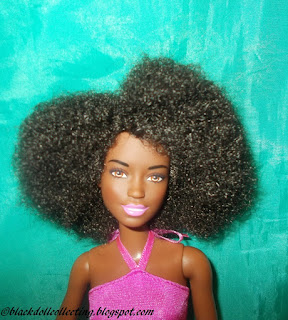 Afro hairstyle has a side part.

Her dark eyebrows accentuate her light brown eye color.  The pale pink lip color is not at all flattering and I wish Mattel would discontinue using it on dolls with this complexion.  Her hair is soft and the texture creates a perfect Afro.  I wasn't feeling the side part initially, but I can live with it.  The next three photos illustrate her Afro from different views. 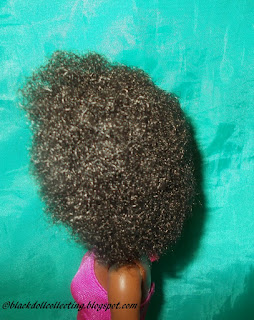 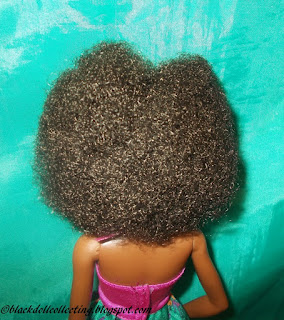 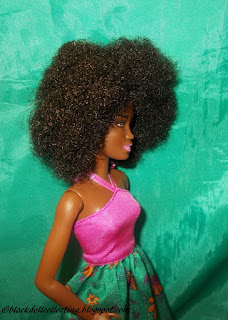 Working with what she arrived wearing, she added a pair of Barbie sunglasses and Barbie knee-high Roman sandals.  We took both inside and outside pictures (shown next) of this look. 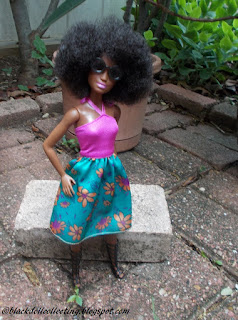 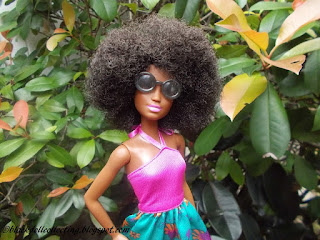 After trying on a Sparkle Girlz fashion with the Barbie Roman sandals and sunglasses, her ears were pierced and a pair of gold dangle earrings, made from a pair of human earrings, were inserted.  She looks super fly! 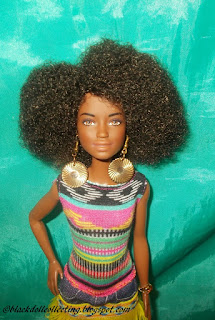 She shows off her temporary nude lips after the original color was removed with fingernail polish remover. 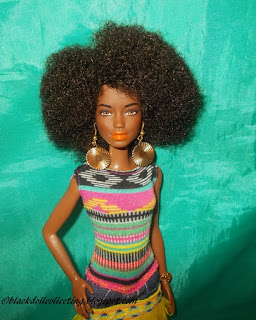 From acrylic paint on hand, she chose pueblo (which is not as bright as it appears in this photo, but it is a brighter color than I would have chosen for her).  Even though she likes it, I might tone it down later. 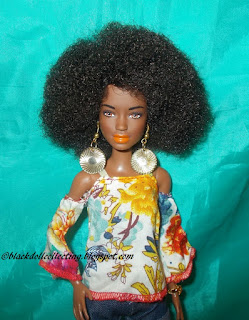 The colors in the blouse better complement her new lip color, which is an improvement over the original light pink.  See the before and after lip color image next.

Overall assessment: I like her! With the pink lip color replaced, redressed, and Afro shaped appropriately, I love her!

Images taken of the back of the box illustrate several other new Fashionistas (some of which are Kens).  Click or stretch to enlarge for a better view. 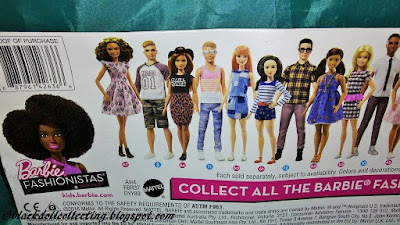 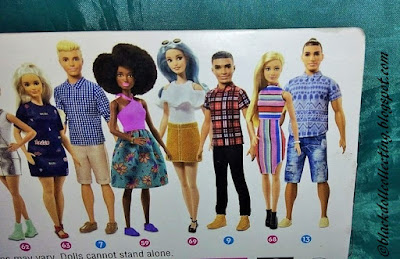 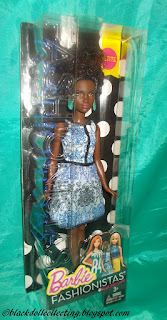 Blue Brocade, Fashionista #25, a petite Barbie released in 2016 (box date 2015) jumped in the Amazon dot com cart with Fashionista #59.  She looks like a mini So In Style Chandra.  Because of her petite height, I plan to restyle her hair to give her a more youthful, teen look and remove those hideous light blue plastic earrings.  Redressing will probably be done as well.  With her size, Sparkle Girlz clothing should easily fit, but for now, she remains in her box.