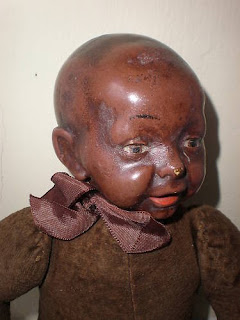 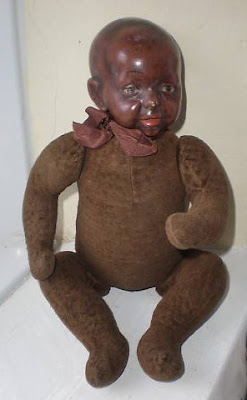 Baby Bumps by E. I. Horsman dates back to 1910.  With the exception of color, the black version is identical to the white doll, which was marketed as an "Art Doll" or character doll fashioned after a real child.  Constructed with a flange composition head and velvet body with jointed limbs, the doll was one of Horsman's "Can't Break-Em" dolls.  (Supposedly composition dolls would not break.) Thus the name "Baby Bumps."
According to Collector's Guide to Horsman Dolls Identification and Values 1865-1950 by Don Jenson (Collector Books, 2002):

...At first, Baby Bumps had a pink velvet body, stuffed with ground cork, and paw-like hands.  Later versions had sateen or muslin bodies and jointed sateen arms and legs.  From 1911, some versions had composition hands.  While most were white, a doll Horsman advertised as Colored Baby Bumps was sold" [as illustrated in the images above, including the velvet or plush body and paw hands].

Horsman was a forerunner in the manufacture of black dolls in the US.  Other early black dolls by Horsman include, a variety of black Babyland rag dolls including a Topsy-Turvy Babyland Rag Doll with two lithographed faces depicting characters, Eva and Topsy, from Uncle Tom's Cabin.  Bingo, Cotton Joe, Sambo, and Topsy were additional "Can't Break-Em" composition dolls manufactured between 1910 and 1914.  Black Dimples, a 13-1/2 inch composition baby with trademark facial dimples was manufactured in the 1920s as was Black Peterkins, a 13-1/2 inch girl, circa 1929.  Patsy look-a-likes appeared in the 1930s, and in the 1940s, a 21-inch, all-composition doll, Rosebud.  Of course there were others.

Essentially, with the exception of Bingo, Cotton Joe, and Topsy, and later in the 1950s (Pete and his twin sister Polly), Horman dolls were usually dark skinned versions of their white counterparts, but black dolls nonetheless.