Romance and Roses Coquette Cissy (Cissy), like many other Madame Alexander dolls I own, arrived with a skin condition that I used to refer to as the Madame Alexander Doll Disease.  I no longer refer to it as a disease because it is not contagious (not that all human diseases are, but doll diseases are and will spread from doll to doll, e.g. the Hard Plastic Doll Disease). 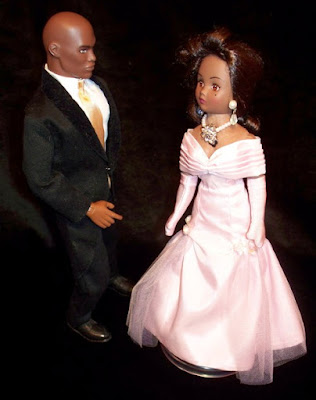 In this photo taken in 2010 of Cissy, the condition can be seen on the visible portions of her décolleté.

Several Madame Alexander dolls that are made from the company's version of the original 1950s hard plastic materials will often turn a grayish color on their legs that mimics the appearance of dry skin. This condition, as in the case of Cissy, can also occur on their arms and torsos.  Usually the dolls' faces are spared because these are made from different materials.  I have been so disgusted by this and have not purchased older (1990s) Madame Alexander dolls in quite some time, as I have found that usually dolls prior to the manufacture year of 2000 are more susceptible to developing this condition.  There are exceptions to the age-of-the-doll rule, with Cissy, manufactured in 2005, being one of those exceptions.

After recently rearranging the shelf on which Cissy is displayed, I removed her dress to see if another doll could wear it (one of my Curvy Barbies).  She could not.  Before redressing Cissy, I examined her "condition" and decided to attempt a remedy.

The Remedy
I applied a small amount of coconut-scented Karelen Dry Oil to the affected areas and rubbed it in thoroughly.  The dryness vanished instantly as illustrated in the next series of photos.

To be certain the treated areas were not oily and and that the dryness had not returned, I waited 48 hours before redressing Cissy.


Above, Cissy rejoins her mate, who (according to my husband) is not a good fit for her. "That doll couple doesn't match.  The man has a character face; the doll has a doll face." (He was right in 2010 when he said this and he is still right now, but they choose to remain a couple.  It is interesting how he referred to Juan as "the man," and Cissy as "the doll.")

*I could tell from my daughter's facial expression and silence as I answered her question, "Who has a scaly skin rash?" that she just does not understand the passion of a doll enthusiast.  My answer was brief, but because the condition involved a doll (and not one of her children, whom she was here to pick up), I do not think she really cared.  I guess some people will never understand my passion for dolls, and I am completely okay with that as long as they stay in their lanes by enjoying whatever it is they are passionate about and allowing me to do the same.