Text from back of Gabby Douglas Barbie box reads:

"I love a challenge.  I love to push limits and I love that my very own Barbie doll celebrates me for being a role model to girls." —Gabby Douglas

Additional text from the back of the box:

When Gabby Douglas was just four years-old, her older sister showed her how to do a cartwheel.  The little girl tumbling around her house would later become the first woman of color to win the individual all-around competition for gymnastics.  Her confidence, work ethic and belief in herself make her an extraordinary role model to girls.  The Gabby Douglas Barbie doll celebrates the extraordinary accomplishments of this inspiring athlete who breaks boundaries and expands possibilities for women everywhere.  Whether she is training at the gym or dazzling the crowd during competition, Gabby has earned her spot as a true Barbie "Shero"!


Initially created as a one-of-a-kind (OOAK) doll in 2016, part of Mattel's Sheroes campaign, the production doll has a box date of 2016 as well.  It was released to the market in May 2017.  Whether or not Mattel already had plans to release the doll, or if the Internet petition for the doll that was created in July 2016 influenced their decision to produce it, remains unknown.  As a collector, I am excited to now own two.


The doll's head sculpt is a very good likeness of Douglas (Mattel always produces the best portrait dolls).  With the exception of the eyes appearing somewhat lighter brown and the lip color being slightly different, the production doll actually looks quite like the OOAK doll.

Gabby Douglas Barbie has black rooted hair styled in a ponytail with crimped ends.  She has light brown painted eyes.  Dressed in a white gymnastics leotard with red, white, blue, and stars design on front, the back of the leotard is white with a Velcro closure.  Her two-piece warm-up suit has a pink jacket with black sleeves and faux zippered front.  The black pants have a pink stripe on the sides.  The Nike swoosh is on the front of the jacket and top-left pant leg.  She wears white high-top sneakers.

A doll stand and certificate of authenticity are included with the doll.

I deboxed one of my two dolls to display.  The freed doll readily posed as illustrated below: 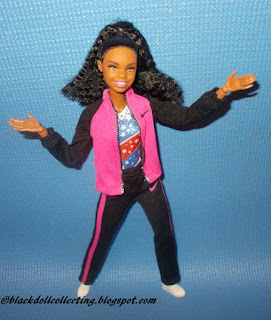 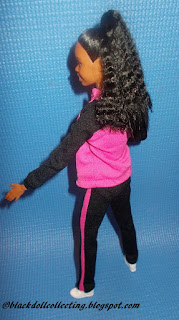 With the Made to Move Barbie body, the doll has multiple points of articulation:

We had many more Sparkle Girlz fashions to try, but we decided to stop with these three and return Gabby to her original clothes.  After doing so, Gabby found a temporary place of display in the collection.  (I imagine she will be doing aerial walkovers, somersaults, and cartwheels from location to location until she finds the perfect place.) 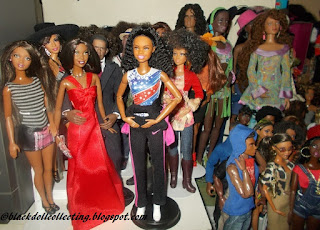 Another blog post on the Gabby Douglas Barbie by Roxanne's Dolls includes a video review that better illustrates the doll's articulation and other features.

To purchase (while quantities last), here is link to the BarbieCollection . com buy page.