Joy in the Palm of My Hand


After seeing Joy's adorable face as the doll advertising a Dollmaking Party event posted on Facebook by the artist who made her, I thought "how precious!"  The event is a cloth dollmaking workshop, which takes place on May 6, 2017, in Philadelphia.  I knew it would be impossible for me to attend, but that did not prevent my adoration of Joy.

Later that day or within the same week, the artist, Sharon E. Tucker, posted Joy for sale along with several other 8-inch-in-the-seated-position Tub-It Dolls, some of which were already marked sold.  I considered inquiring about Joy, but the price was not indicated, so I did not bother to ask.  An update to that post a day or so later revealed the price after someone else inquired.  The price was reasonable, so I named and claimed Joy as mine.


She arrived quickly.  It was at that time I discovered her head is permanently positioned slightly to her right, which gives her an inquisitive demeanor.  Something has happened or she has heard something she is not quite sure about.  She wants to know more. 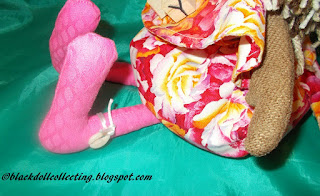 Her arms, as shown here and immediately above, are made of the same fabric as her face. Her legs and feet are sewn of pink fabric. A ribbon with cowrie shell is tied around her left ankle.  Her sewn-on clothing consists of two pieces of multicolored floral material, the bottom portion of which is pellet weighted.