Fab Fringe Gets a Little Edgy 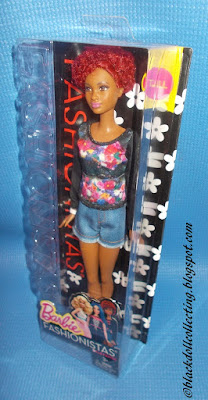 After she arrived as a birthday gift from my son last year, Fab Fringe (the tall redhead Barbie with the short Afro shown above) remained in her original unflattering clothes:  floral front, long-sleeve shirt, denim shorts, and black booties.  Later in the year, I purchased three Black Dolls Matter T-shirts from the Etsy shop of the same name.  Fab Fringe replaced her original top with one of those T-shirts and continued wearing her denim shorts and booties with it, as seen here.  Because of her short hair and the need for earrings, I pierced her ears shortly after she arrived, after which she wore gold hoop earrings. 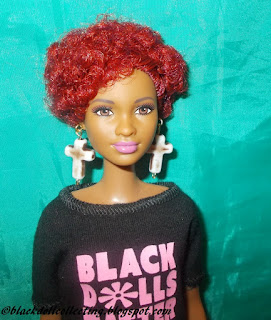 After Zig and Zag (or ZiZi) borrowed Fab Fringe's gold hoops, I made a pair of earrings for Fab Fringe by removing two crosses from an inexpensive necklace and adding earring hook wires to each.


What gives Fab Fringe her edginess is the black leggings she now wears underneath a black skirt made from a headband and of course her Black Dolls Matter T-shirt.  Initially, she was going to wear the skirt without the leggings, but the stretch of the fabric made it see-through.  She slipped on the leggings to avoid being that edgy.

Fab Fringe is going to a protest rally that will be held outside the headquarters of a major doll manufacturer. It will be a peaceful protest, but her presence alone, coupled with her attire along with the other ladies who will accompany her, should send the proper message to the doll company that their lines should reflect the society in which we live.  Their concern is the lack of African American male dolls.  Where are they?  The ladies want to know.

The ladies who will join Fab Fringe are Emoji Fun Barbie, ZiZi, Tamica, and Musician Barbie. Take a look at their signs. 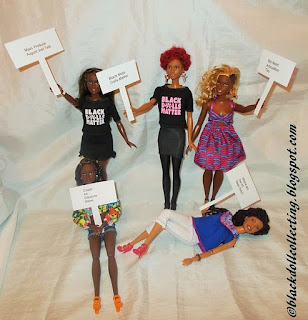 These ladies want the men represented and they want them now!