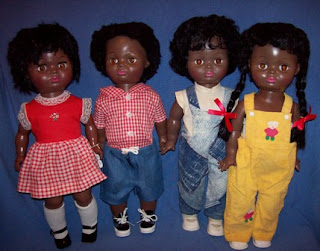 According to Black Dolls 1820-1991, an Identification and Value Guide, by Myla Perkins (Collector Books, 1993), The B. Wright Toy Company, Inc., circa late 1960s-?, was “the first 'Negro' toy company to manufacture dolls and stuffed toys.” Beatrice Wright was an African American female entrepreneur and educator who realized the need for natural-looking dolls for children of color. Her dolls were known as the “Ethnic People Dolls.”

The company manufactured several different Black dolls and dolls representing other ethnicities, too.  The most highly sought after Black B. Wright dolls are Christine and Christopher.

The dolls are 19 inches tall and constructed of Lyka skin, a type of rigid vinyl advertised as "the closest thing to nature's cover."  They have brown sleep eyes and black rooted hair.  Boys usually have straight hair with a side part. Essentially, the same mold was used for the dolls that are reported to have been named after Ms. Wright's family members.  The dolls are either marked B. Wright or Beatrice Wright/©1967 and can be found on the secondary market.

It is uncertain when the B. Wright Company closed its doors, but some of its molds were sold to Totsy. Manufacture of the dolls continued under Totsy throughout the late 1980s and possibly into the early 1990s.

B. Wright Doll Sightings on the Internet


(They do all look alike.)
dbg
Posted by Black Doll Enthusiast at 7:23 PM