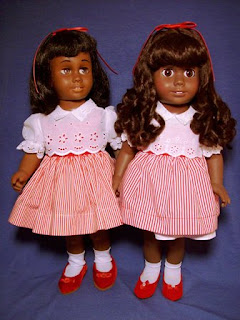 Next to Barbie, Chatty Cathy remains one of Mattel's most popular dolls.  Chatty Cathy doll enthusiasts might argue that she is more popular.

In 2004, Ashton Drake nicely reproduced a 19-inch, battery-operated, pullstring African American Chatty Cathy (shown on the right in the first image).  Their online price was $99.99 but advertised as $79.99 in print ads or if ordered by phone.  I believe the online price was eventually corrected to match that of the print ad and the white version. 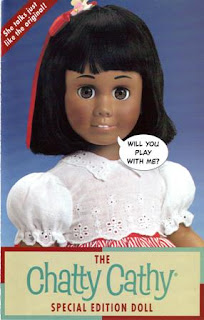 Danbury Mint's 2004 version (shown above on the cover of their flyer) is also a battery-operated, pullstring talker.  Their version, however, is porcelain, stands only 17-1/2-inches, and retailed for $129.

Prior to that, in 2001, Mattel replicated an even smaller, 14-inch vinyl version (with decals for eyes!).  This one recites fewer phrases than the original 1960s doll. 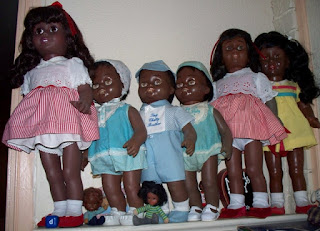 Three other popular talkers by Mattel include Chatty Baby (shown above), Drowsy, and the elusive black version of Baby Small-Talk, pictured below.  My Drowsy is stored away with other play line dolls as is the reproduction Chatty Cathy with decaled eyes (what was Mattel thinking?) 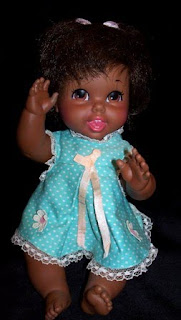