It is common knowledge that black Francie (whose marketed name was Colored Francie) was the first dark-skinned doll introduced in Mattel's Barbie line in 1965.  White Francie had been marketed a year prior as Barbie's MODern cousin.  This familial relationship was not used on the black doll's box; however, it stands to reason that if white Francie was her cousin; black Francie had to be as well.  The black doll was followed by friend-of-Barbie, Christie in 1968 (people often mistake Christie as Barbie's first black friend; well I guess technically she is if black Francie was her cousin). Two versions of black Francie were made:  one with red hair and one with dark brown hair.  1965 is the box date for both versions.  Francie continues to command rather exorbitant prices on the secondary market.  As a result, I do not own an original black Francie. 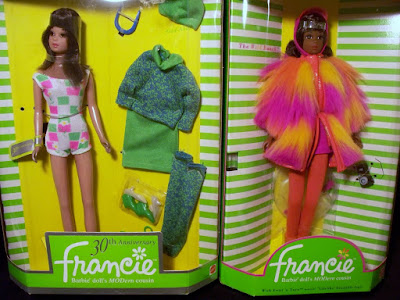 After the release of the 30th Anniversary reproduction Francie (the white doll) in 1996, I dyed/painted one brown (shown above).  This was one of my first attempts at colorizing a doll.  A manufactured black version entered my collection later that same year when Wild Bunch Francie was released. 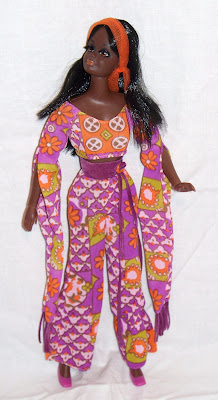 Live Action Christie remains one of my favorite vintage friends of Barbie followed by the ebony-complexioned Malibu Christie. 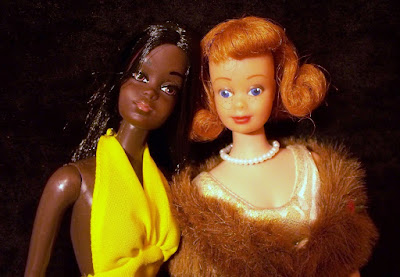 Because of the notable similarities and very slight differences, I am of the opinion that vintage Christie uses the same mold as original Midge, or perhaps a tweaked version of Midge's mold. 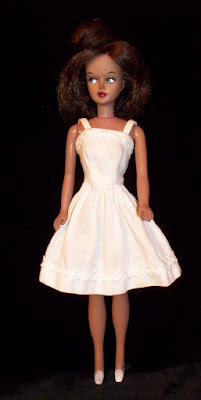 Many companies attempted to ride the coattails of Mattel by producing teen fashion dolls.  American Character produced a limited edition of black Tressy dolls after first producing the white version.  Tressy is not only a fashion doll, but she has hair that grows with the aid of her grow-hair mechanism.  She is essenitally America's first grow-hair doll.  Later, Ideal Toys obtained the rights to the Tressy name and grow-hair patent from American Character.  Ideal extended the grown-hair family to incorporate Crissy, Velvet, Cinnamon, et. al.

Similar to black Francie, black Tressy is not an easy doll to acquire when considering "the find" and the price, or vice versa.  Since the price is the precluding factor for me, I again utilized my amateur colorizing skills to make a black one (as pictured above). 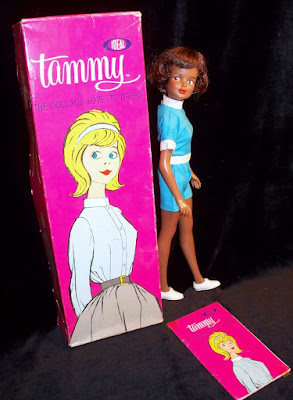 Tammy was Ideal's answer to Barbie.  The rare, black version, Grown Up Tammy, entered the line in 1963.  I was blessed with my version (not colorized!) in approximately 2003.  While not as popular as Barbie, all versions of Tammy remain favorites for collectors.  The black Grown Up version remains rather elusive.

Sindy, a doll native of Britain, first manufactured in 1963 by Pedigree, is a Tammy-type doll (or Tammy is a Sindy-type doll).  Sindy, later manufactured by Marx, acquired a black friend, Gayle in the 1970s. 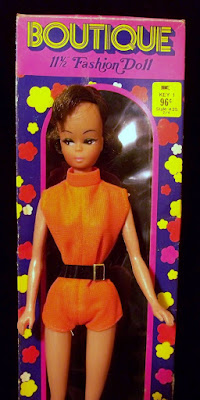 This Barbie Clone by Peggy-Ann Doll Clothes, Inc. no box date, circa 1960s-1970s, was probably originally sold through K-Mart (based on the price tag).

Other less well-known manufacturers produced their versions of teen fashion dolls in the 1960s, but they were no competition for Barbie doll sales. These companies include Hasbro, Kenner, Mego, Shillman, Totsy, and others. 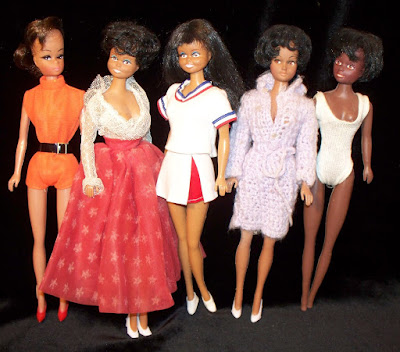 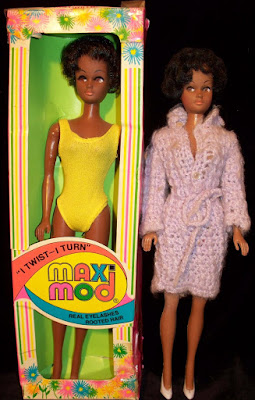 Note:  The Barbie clone may actually be a tan white doll.  If so, she's very tan.  She was sold to me as African American and I've always considered her a black doll.

Other than Barbie and friends, what are your favorite early black fashion dolls?

dbg
Posted by Black Doll Enthusiast at 7:48 AM

There was an Ideal Batgirl who had the Misty headmold that was Black. I used to have Black Maddie Mods (Shillman?) - they were cheap so I could get them myself. The Happy Family from 1973 - the Black version of the Sunshine Family. Oh and my favorite, a big-eyed child doll around 8 inches - "Soul Sister" doll. Soul Sister was very dark and she had a bob-afro. Hasbro's Love had a Black friend, Soul. (I never got a Soul doll. Sigh.)

Dearest of all to me though was my Malibu Christie because she was tanned - darker - as if she had been on the beach as much as Barbie and the others. Also, she reminded me of my favorite aunt on my father's side.

Thanks for commenting D7ana and for letting me know you enjoyed this MIBDH installment.

I have all of the dolls you've mentioned above. They're featured in my first book (with the exception of the Happy Family. I excluded them because they are in one of Myla's books. I did include their paper dolls in book 1.) Maybe I'll scan the pages from book 1 that these dolls appear on and create another blog since it's not easy for me to get to all of the dolls without moving others. There are definitely other fashion dolls or playscale size dolls that deserve a nod or two.

I have come accross a black mattel doll approximately 8 inches tall manufactured by mattel in 1970. Not in box but in excellent condition

You also missed out Wanda, manufactured by Shindana. A cool 70's fashion doll for the black doll collector ;)

You are correct. Shindana's Wanda was excluded from this post. A separate post features Disco Wanda and yet another features exclusively Shindana's First Fashion Doll, Career Girl Wanda.

How much is this doll worth I have her

Thanks for sharing information about the original Christie and Midge head sculpts.

Thanks, D7ana. This post
and one other feature two other identical 15-inch Bild Lilli-type dolls.

You can use my search box to search for "Hold Lilli" to find the other post on the Bild Lilli clone.