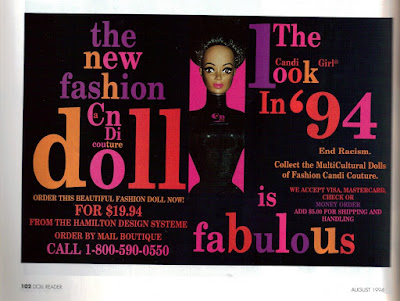 After seeing this colorful ad for a new black fashion doll and reading the caption:

I immediately dialed the 800 number and spoke directly with Helena Hamilton for a while about  her doll and doll fashions, before placing my order for Candi Couture.  Since the details of my 1994 phone conversation with Ms. Hamilton are foggy, I referred to the Black Doll-E-Zine, Vol. 1, Issue 3, Summer 2002, "Dolls in the Spotlight" article, which is shared here (revised only to bring readers up to date on Candi's current status).

The 11-1/2-inch fashion doll of the 90s: Candy Girl, Candi Girl, Candi Couture, Candi, has a name and appearance that are in constant evolution. However, the fact that she was also created by a BOO [black owned and operated] company remains constant. This 11-1/2-inch, fashion doll was brought to life by Helena Hamilton, president, founder and creative director of Hamilton Design Systéme. According to my Internet research and my memory of a telephone conversation held with Ms. Hamilton shortly after the original Candi Couture doll was advertised in a 1993/94 doll publication, "Helena's enterprising journey began in 1988 while she and her daughter, Nina, spent quality time together playing with Barbie dolls. She soon started to sew for her daughter's dolls and had a lot of fun doing it. However, being an artist, she soon wanted to do more. Her idea was an ethnic fashion doll with realistic features" to which her daughter could relate. 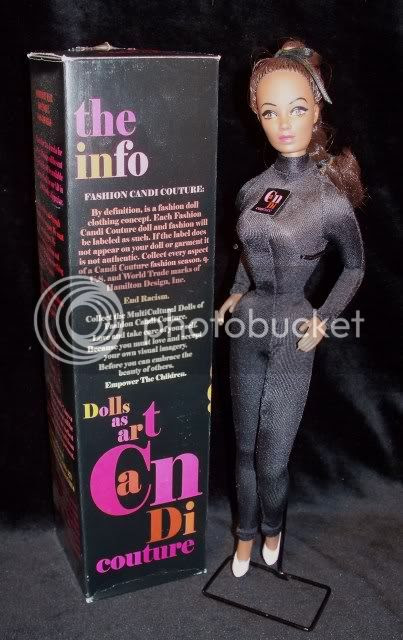 Candi Couture (pictured above) hit the doll scene in 1994 dressed in a black spandex cat suit, the bodice of which bore the name "Candi Couture" in pink lettering. Wearing pink high heel shoes; an upswept, dark brown, braided ponytail and a "serious-sister" facial expression, this doll had a look that was hers alone. Her fuller-than-the-Plastic-Princess's hips also distinguished her from any other 11-1/2 fashion doll. Pictured [below] is 1996s Candi Girl, aka Popular Price Candi. She wears a red spandex dress that has "Candi Couture" imprinted on the bodice and red heels. She has long, black rooted hair. The original black cat suit-wearing Candi evolved into a highly collectible, 11-1/2-inch fashion doll and was available in a variety of ethnicities as well as a variety of African American skin tones. 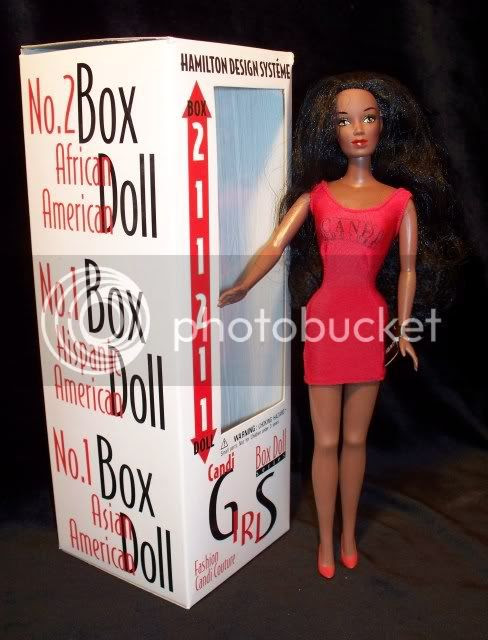 To appeal to women whose childhood doll play commenced in the 1960s, Retro Candi made her debut in 1998. Sporting a retro black and white swimsuit, black sunglasses, and black high-heel shoes, she arrived in a full cardboard box that contained illustrations of her various fashions. Her accessories and fashion-illustrated box enhanced Candi's retro appeal. There were several versions of Retro Candi available. 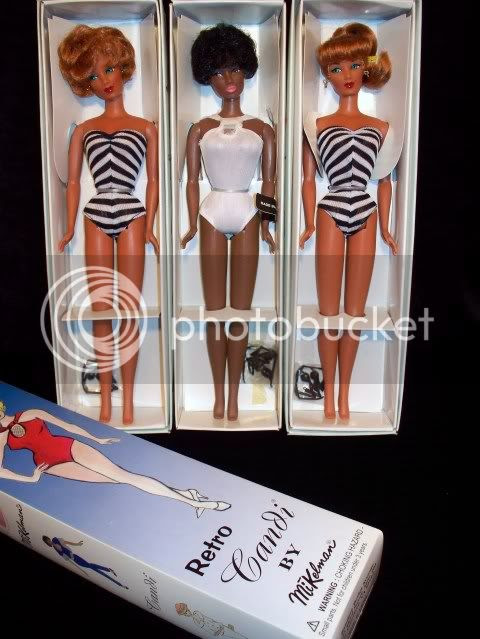 Pictured [above are two honey skin tone Retro Candi dolls, the bubble cut and ponytail versions, and a  darker skinned [bubblecut] version that was also available with a ponytail. 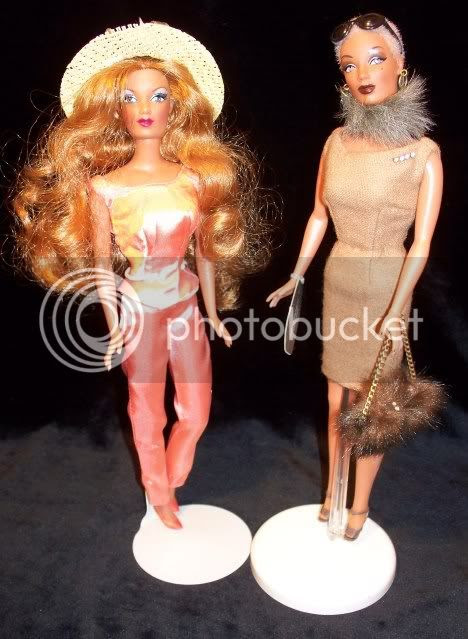 Honey skin Candi wearing the St. Tropez Separates outfit (pictured left), also from 1998, was another auburn haired version of the ever-evolving Candi.   Pictured to the right of Honey Candi is International Candi from 2001. Her caramel colored skin with contrasting short, platinum blonde afro wowed collectors. This doll was a huge success and sold out quickly. 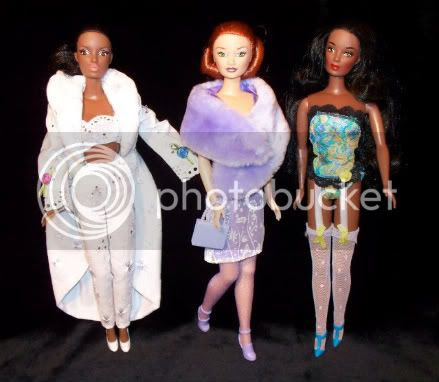 Candi certainly carved a niche of her own with collectors. Before the last dolls were produced, Ms. Hamilton worked briefly with Paul David and Mikelman to produce several lines of dolls that wore Mikelman-designed fashions. [Retro Candi, Honey Candi in St. Tropez fashion, and Candi Secrets dolls resulted from a collaboration between Hamilton and Mikelman.]  In a 1997 Paul David Fashion Dolls catalogue, he writes:

Welcome to the world of Candi!  It has now been over a year since Mikelman and myself joined with Hamilton Design Systeme (Helena Hamilton CEO) to help create the ultimate fashion doll collection!...

Inspired by fun-filled doll play between a mother and daughter, Candi developed a huge fashion-doll collector following.  While her doll life was short lived , she managed to make a mark on the doll-collecting community worldwide as one of the first, you-know-I'm-fierce-and-glamorous-and-you-want-to-be-me, black fashion dolls!  Candi most definitely set the pace that others wanted to follow.