No Mattel, didn't make a dark-skinned Skipper in the 1960s.  Homecoming Skipper, their first dark skinned version, was not released until 1989.   By then, Skipper's head sculpt had changed.

I wanted a dark skinned Skipper with the original Skipper head sculpt, like the one from my childhood.  So I set out to dye one in the late 1990s/early 2000s.  Skipper's head, arms, and legs absorbed the dye.  Her original blonde hair turned an uneven auburn color after dyeing.  Her rigid plastic body would not absorb the dye and had to be painted.  The end result was so disastrous looking that I kept her locked in a file closet in the doll room until recently.

After reconnecting with poor pitiful looking Skipper a few months ago, I attempted to use a paint pen to paint her one color.  This was another failure.  Skipper and I both realized the inevitable.  I would have to paint her to achieve an even color.  Painting is something I do not enjoy doing, but it had to be done.

Skipper's face was painted with a paint pen in the above picture after a failed attempt to dye her one color several years prior.  The paint pen gave her face a wood grain appearance, which did not work for either of us.  I used the paint pen for her body, arms, and legs (not shown) but the paint would not dry completely on her arms.  The next step was to paint her one color with acrylic paint (I didn't remove any of the previous paint). 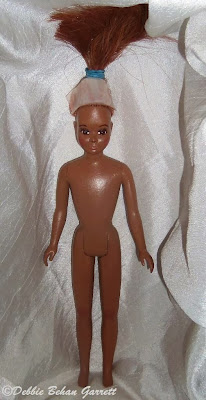 The close-up and full-view images illustrate Skipper's even complexion after painting with acrylic paint and sealing with varnish.  This was done after first pulling her hair up into a ponytail and taping her bangs away from her forehead with masking tape.

I am not crazy about her hair color.  The plan was to use brown mascara to darken it, but local stores only had black.  The color remains brassy. 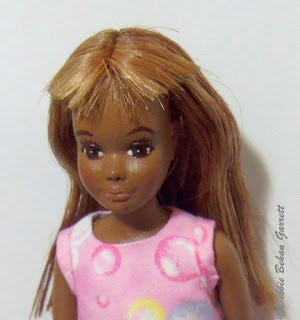 The eyes, eyelashes, and eyebrows are always challenging for me to paint, but I think Skipper has maintained her original little-girl sweetness.

This pink and blue dress looks almost as though it was made for Skipper. 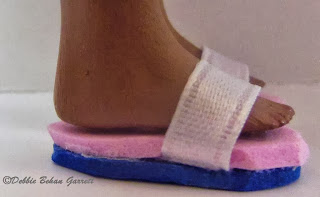 I didn't have shoes to fit her narrow feet, so I made a pair using pink and blue foam and white ribbon for the single-strap vamp. 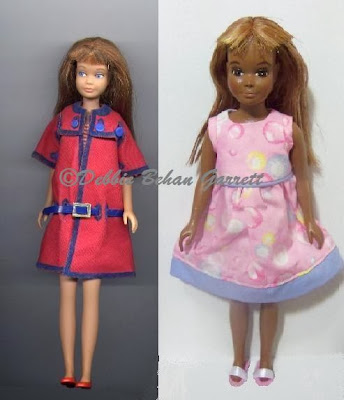 In this final picture, my childhood doll's photo is combined with my recently released (from lock down) now even-colored 1960s Skipper.