Fashion Madness Denise and Others Found at Wal-Mart

Friend of Fashion Madness Kenya, Denise was found at Wal-Mart. This basic version is $9.97.  Her arms are not jointed but her knees are.   She looks much better in person than in her online pictures.  I immediately removed her from the box for a full examination.

The dress quality is good and her black T-strap high-heels are a nice complement. 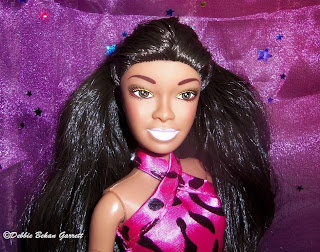 Her round, Teresa Giudice hairline looks a little awkward, but there's always a quick remedy. 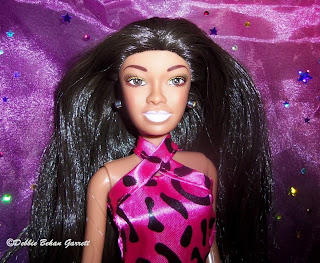 I removed the rubber band that kept the sides of her hair pulled back in a ponytail.  The looser style helps conceal her round hairline.  Since the basic dolls do not come with earrings, I added a pair of studs.

I was happy there was a Denise at Wal-Mart that I liked.  There were others for $14.97 that came with an accessory and probably had earrings.   The $14.97 dolls use some of Kenya's fashions and themes.  For example, Movin' On Denise is dressed in part of  Movin' On Kenya's outfit, minus the leopard coat. There were at least two other basic dolls.  One of the other basic dolls wore a summery white top and blue pencil skirt.

My Movin' On Kenya welcomed Denise with open arms; but after waiting nearly a year for her to arrive, she had a question for her. 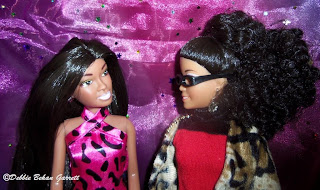 Kenya:  Girl, what took you so long to get here? 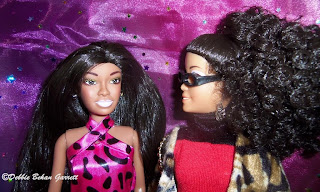 Denise:  It's a long story, but bottom line, I got held up in China.  There were a few production issues and last minute changes that delayed my arrival to the States. 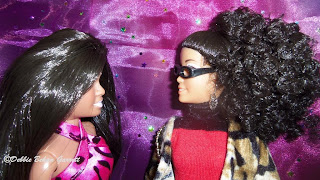 Kenya:  Sounds like you've been through a lot, but I'm glad you're here now. 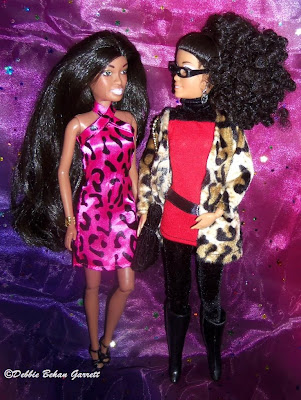 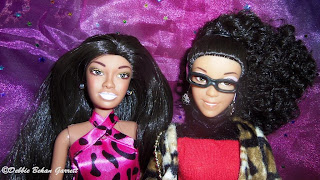 In unison:  Now if those big headed boys and Keyshia would arrive, the wait would be over.

TJ, Dwayne, and Keyshia were not available at my Wal-Mart.  Hopefully they will arrive soon, but I did find the following Kelly-size Little Princess Sparkle Girlz by Funville. 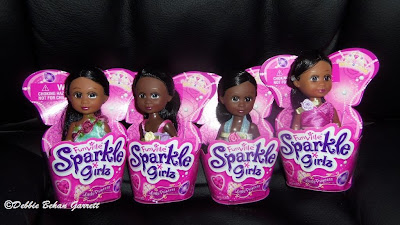 There were several different versions (clothing wise) and it appears there are two complexions, medium and dark. I purchased two medium and two dark.  I'll keep two and give two away. 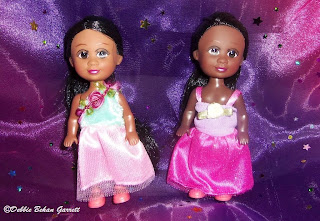 The complexion difference can be seen better in the image above.

Both have black rooted hair pulled back into a ponytail. 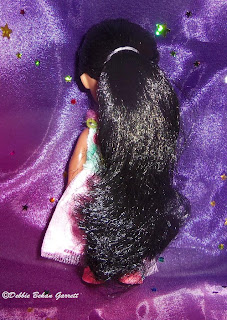 The ones I did not buy had a shorter ponytail, the ends of which were tucked under the rubber band that holds it in place. 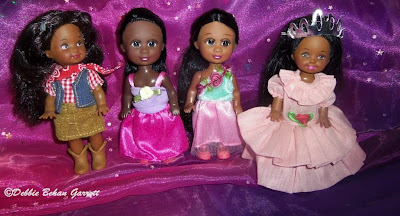 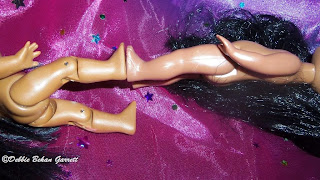 Body Comparison:  Little Princess has a longer torso and a wider stance than Kelly. 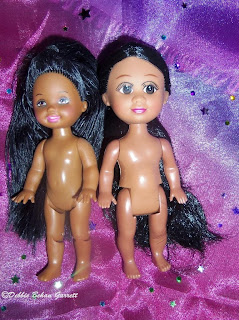 For $2.47, I couldn't resist buying the four I purchased.

I bought four of those little Sparkle Girlz last week. I have never seen a Kelly as dark as the ones with the darker skin tone so I was especially pleased to get them. I showed them to a friend who suggested it would be cute to decorate a Christmas tree with these little dolls. If I were into Christmas decorations that would have been the perfect excuse to go back and buy two dozen!

After leaving the toy department of Wal-Mart (WM), I ventured to Electronics for a purchase that I was required to pay for there. I had more shopping to do, so I just paid for that item, but the WM associate noticed the Sparkle Girlz in my basket and commented, "How cute! Let me see? Are you going to decorate a cake?" I replied, "No, but that would be a cute idea. I don't know what I am going to do with them." She didn't even notice Denise.

Using them as ornaments for any occasion is an excellent idea. I have used dolls to decorate wreaths and Christmas trees in the past, but I won't be doing that with these. Great idea, however. I may have to go back and grab the rest for someone who often uses dolls to decorate a small ornament tree or maybe decorate one for her. Thanks for the suggestion.

Congrats on getting your Denise. Now that I think about it, I'm sure there were Denise's there when I bought my Kenya. I was so focused on trying to find the men, that I overlooked her. At that time it wouldn't have mattered because I was only buying one female doll. Denise has a familiar look about her.

Thanks for the comparison of the Sparkle Girlz. They always seemed so much larger than the Kelly dolls. I see now, only the head is larger.

Thanks, Vanessa! I almost overlooked Denise. All I saw initially were the next FM Kenyas and the Kenya styling head. Denise was in back of the Kenyas.

The Sparkle Girlz, although cute, do suffer from the over-sized head syndrome that seems to have infected the playline market for the past several years.

Thanks for sharing this information about the dolls. I LOVE your Kenya and Denise story, best though. I could *hear* them having that conversation, lol.

@Vanessa - love to read how you were so busy looking for the men, lol. (T.J. and Dwayne) The Morristown ladies know what to keep you focused on ;-)

You're welcome D7ana! I took some "out and about" photos with my not-so-smart cell phone while at Wal-Mart that day. I wasn't able to transfer them in time for the post, but now that I have them stored, I might do a followup post on the other FM Kenya Denise dolls that I saw when Denise was purchased.

I own a few of the little Kenya, too. Sparkle Girlz' proportions are much better than Little Kenya's. 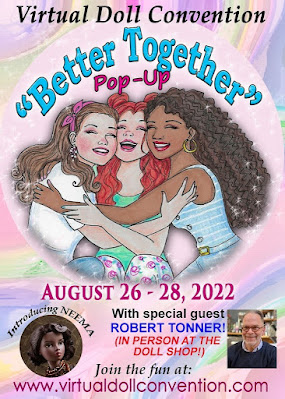