A Unique Dress for Kelly


Kelly arrived several years ago wearing what appeared to be her original silver dress, blue tights, and silver shoes, oh and a silver crown.  She was sent to me attached to a wreath.  The wreath was discarded shortly after Kelly arrived.

For one reason or another, years later, I removed Kelly's dress and tights and then misplaced these.  Until a few days ago she was dressed in the pink dress shown above.  This was supposed to be temporary until I located her original dress and tights.


After featuring her recently in the comparison images with one of my two new Sparkle Girlz, I saw how wrong the pink dress was for Kelly.  I went to eBay where I found part of her original dress, tights, and shoes and almost made the seller an offer.  Knowing that her clothes are here somewhere and that I do not need a duplicate, I decided to make something for Kelly using materials on hand. 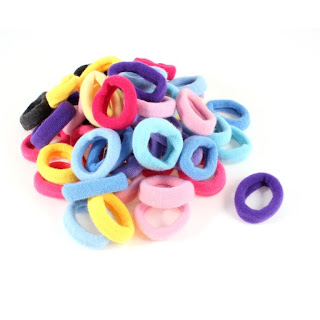 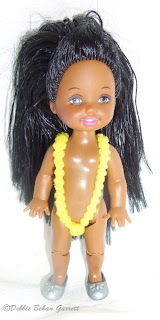 First, I looped two yellow ones together to serve as the straps of her dress and faux "thong" undies (poor Kelly). 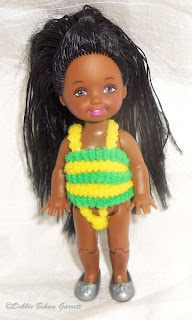 Next, eight ponytail holders were wrapped around her body over the "straps" from chest to above her knees. 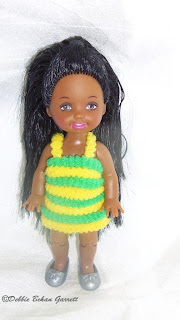 Voila!  Kelly now has a cute colorful dress that did not cost anything except creativity and time.

The ponytail holders can be stitched together using nylon thread or even glued together, if desired. I did not desire to do either just yet but I may do this eventually.