The Internet is a very resourceful tool that has allowed me to connect with wonderful people throughout the past several years.  On the web, I have learned many new things from both men and women who reside in different cities, states, countries and continents.  I hope the exchange has been mutual and that the people whose lives I have entered have benefited from knowing me, if only for a day.

My most recent Internet connection through email correspondence has been with Sally McLean of Gem Art Australia, where unique jewellery pieces from natural gemstones, pearls, vintage beads and other interesting components are created.  Sally did not write me to discuss her jewelry, however.

On August 13, 2013, along with the following email inquiry I received photo attachments:

I have a doll that I was given for my 5th birthday in December 1956. I remember the box and the excitement. As I am a December baby it’s the usual “Happy Birthday/Merry Christmas” thing. 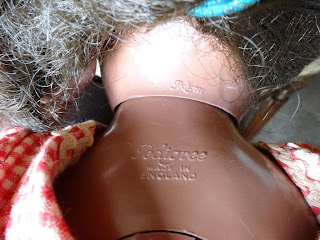 She is stamped “Pedigree England” and is about 50cm (about 20 inches tall). She has her original shoes and has a sound device in her back – I think she used to say “Ma Ma”. She has pinky brown skin, red lips and two very white front teeth. Amber eyes that move side to side and her eyelids close. She has beautiful eyelashes.

She has long acrylic hair that can be brushed but I think that wig may have been added later at the ‘doll’s hospital’ in Adelaide (Australia) as I think she had fixed mohair plaits when I got her.

Do you know anything about this doll – is it of interest as being unusual or rare? I’d like to find her a good home. I have been carrying her around in a bag for over 50 years – it would be nice to see her loved and appreciated again. I have no daughters and no grandchildren. Not looking for money but would require packaging and postage paid.
I saw one on UK eBay and they called it a PEDIGREE Delite 20" Mulatto/Dusky Toddler and it sold for $GBP218.

It was 4 a.m. and Sally's email was one of the first I read that morning prior to taking my first sip of coffee and beginning my workday.  I incorrectly assumed she only sought her doll's ID and value.  In my initial reply, I referred her to two Pedigree doll aficionados*.  In a subsequent email, Sally corrected my confused thinking and iterated that she wanted to find a new adoptive home for her doll and offered her to me for the cost of her travel (postage).  Because of my huge affection for dolls made during the 1950s, I was thrilled to accept Sally's doll, but more honored after learning that she had been Sally's only doll in her lifetime!  What-an-honor she was bestowing on me.

Sally provided the following additional information with one request after I agreed to adopt her brown doll:

The shoes are original and the dress (made of gingham) was made by my mother who was a professional dressmaker and died this year (aged 92). I don’t know if you name your dolls but if you could call this one “Betty” (my mother’s name) that would make me happy... I am just starting to appreciate ‘history’ and I am in awe of people like yourself who admire and preserve it.

Before the travel arrangements and expenses were determined and paid, like a true mother, Sally explained to Betty what was in store for her.  She tidied her clothing and provided me with additional history:


I have told Betty she is going on holidays and that at last she will have some friends. She was my only doll. My sister (4 years older) had 2 dolls – but they were smaller, and white, and I always felt my doll was so superior. Oddly enough I don’t recall her having a name other than “Dolly”... 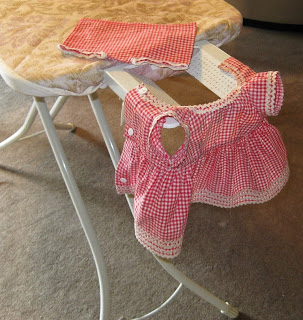 I washed and ironed her dress and knickers today. They came up remarkably well. I had to put new elastic in her knickers – the old stuff had perished. Can’t have a girl going abroad with her panties falling down! I cleaned her shoes, combed her hair and found a red hair ribbon for her hair.


Before her departure, Betty was also given new laces for her shoes.


I wondered how Sally found me and without even asking, in another email, she explained:

I recently found ‘Dolly’ zipped up in a bag deep in a dark closet and felt very sad for her. I didn’t want her sitting on the couch, nor did I want to give her to a child, nor did I want to auction her off. I did a bit of Googling in an attempt to find out some details about her and found your name, your blog and your book and just thought “This lady loves black dolls” and I was so pleased. 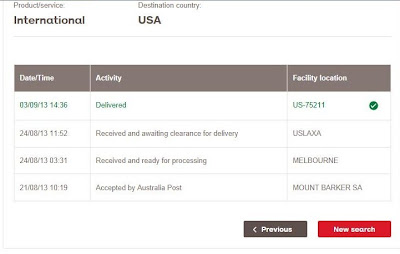 As indicated in the above snapshot of Betty's tracking, she departed Australia for the States on 08/21/2013 and arrived in the US on 08/24/2013.  She had an extended delay in the Customs Department at LAX and was finally released and delivered to my post office box on 09/03/2013.  I picked her up yesterday and am thoroughly pleased.

As I indicated to Sally, she is near perfect and in such pristine condition.  It is evident that she was a loving mother.  I love Betty's flirty eyes -- eyes that follow the movement of her head when it is moved to either side. This enhances her appeal and character.  I will continue to love this delightful little girl, hopefully for 50 more years.


What a beautiful doll! I don't think she has any special name as such, she is a dusky brown Saucy Walker, made in the early to mid 1950s. Yes, she would originally have had plaits.
Best wishes,
Sue


Thanks again, again, and again Sally!

Posted by Black Doll Enthusiast at 3:00 AM