I have owned Fresh Dolls Tamra since 2017.  She has waited patiently to be deboxed.  All the while she has been envious of her sister, Mia, who enjoyed an immediate deboxing upon arrival in 2017.  Of all the Fresh Dolls I own (all of the dolls from wave 1 and the Fresh Squad guys), Mia is the only doll that has enjoyed being free.  Mia has also enjoyed being redressed on several occasions.


After deciding to participate in a Black History month redressing event with the Fresh Dolls Facebook group, I decided to debox Tamra.  Initially, I was going to debox the ebony-complexioned Lynette shown here with Mia and Tamra, but Tamra was the first Fresh doll I found.

Tamra undressed.  I stored her clothes and shoes to prepare her for her redress in a custom dress by LayleeM Doll Clothes (a link to Laylee's Etsy shop is included in the references).  I had recently seen another one of Laylee's creations using the same waxed African fabric used for Tamra's dress and I commissioned her to make a dress for Tamra.

Tamra's dress was fashioned after the one shown above.  My only additional request was that the dress would have a side slit and a coordinating headwrap.


Because Tamra needed jewelry, I made bracelets and a wide choker using gold-tone braid/loc accessories. 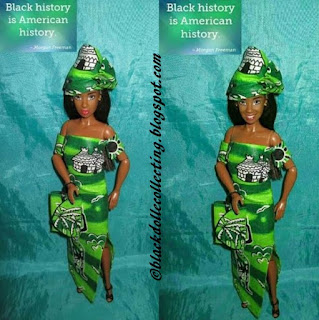 There are countless items to collect and write about. Black dolls chose me.