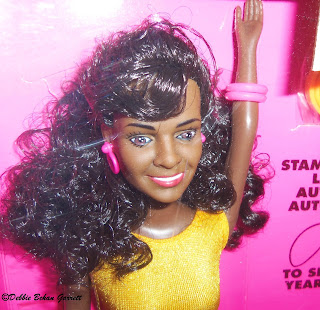 Saved by the Bell-character Lisa, played by Lark Voorhies, was captured in playscale doll form by Tiger Toys in 1992. They did a decent job of reproducing her 1992 likeness, but no one can mass produce for the play market better portrait dolls than Mattel.  Lark was always a pretty girl to me.  Apart from Saved by the Bell, Voorhies has appeared in music videos, TV commercials, soap operas, and currently manages her production company.  Divorced, she was once engaged to Martin Lawrence.
Clueless movie and TV series character Dionne, made by Mattel in 1996, is a good likeness of  Stacey Dash, who played the Dionne role.  This 11-1/2 inch doll has a puppy/back pack, a cell phone, and a feather-topped ink pen.  Other dolls in this series were made of Clueless characters, Amber and Cher.  Learn more about the real Stacey Dash here.
These dolls were and are back on the same display shelf with Beverly Johnson and Naomi Campbell.

Follow my Dolls for Sale blog
Posted by Black Doll Enthusiast at 4:00 PM