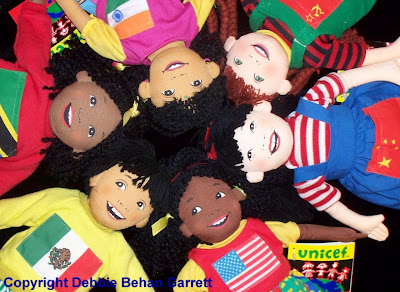 After repositioning some dolls on a built-in shelf that houses a mixture of cloth, composition, celluloid, resin, and other vintage-to-modern dolls and realizing I have not photographed this mini collection together, I decided to do that, share the images, and provide information about these dolls from many lands.

With a copyright of 1991, these six dolls are part of the UNICEF Kids collection (there were a total of nine dolls available).  The two dolls at the bottom of the above image are Juan from Mexico and Laurie from the US.  Going counter-clockwise from Laurie, above and around are Liu from China, Tanya from USSR, Sita from India, and Moza from Tanzania.

Each doll is made of cloth with screen-painted facial features, yarn hair, measures 14 in/35.56 cm, and has an attached UNICEF Kids United States Committee booklet.  Each doll's booklet contains a brief biography and incorporates information about their native land.  With the exception of Laurie, each booklet includes a greetings and pronunciation (English-to-native tongue) translation guide for words/phrases:  Hello, Thank You, My Name is, My Favorite Food, My Favorite Game, and Let's Play.  The opposite page includes translation for numbers one through ten from English to the doll's native tongue.  Laurie's book contains United States Trivia questions and answers.  Each booklet also contains information about UNICEF.

Marketed and distributed by European Toy Collection, designed and manufactured by Determined Productions, Inc., I believe the dolls originally retailed for $25.  A portion of the proceeds benefited the U.S. Committee for UNICEF.  According to the booklet, this committee "helps UNICEF provide health care, nutrition and education services to children in 128 developing countries..."

My six were discounted to $9.99 in a Hammacher Schlemmer catalogue in approximately 1992 or 1993. 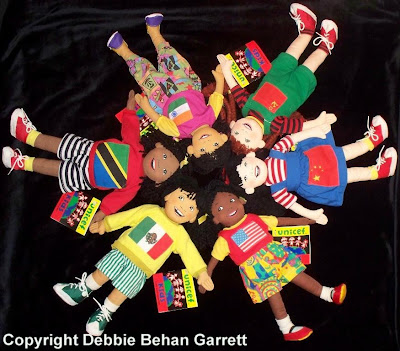 Before succumbing to cancer on January 20, 1993, Audrey Hepburn, a UNICEF ambassador, helped promote the UNICEF Kids.  I recall an advertisement for the dolls that featured Ms. Hepburn.  The ad appeared in at least one of the major doll magazines in 1991 or 1992.

Dolls absent from the above images are:
USA Girl I (Laurie is USA Girl II)
USA Boy
Great Britain Girl

Do you remember the Unicef Barbie and friends?  Was that gown really necessary?
dbg

Please do not copy images or text without my permission.
Posted by Black Doll Enthusiast at 2:46 PM