Soul is from Hasbro's The World of Love collection of 9-inch dolls from the 1970s. The first dolls debuted in 1971.  The handwritten tag that accompanied my doll reads "Soul" World of Love 1971 Hasbro. (Other dolls in the series were Love, Peace, Flower, Music and one guy, Adam, said to be named for the son of one of the doll designers.)

Soul has a twist and turn waist and posable arms and legs. I purchased her for $6 during the 1990s in preloved condition, redressed in royal blue bathing suit. It was just recently that a desire for a mint in box version surfaced. I love her funky psychedelic colored original fashion and recall wearing similar fashions in 1971, while a high school sophomore.  I had searched eBay, but at the time I began writing this post, I had not been successful in my attempt to locate another Soul in the desired condition and price I was willing to pay.

My next option was to redress the $6 doll in an authentic World of Love fashion, but there again, I had not been able to find one that was a must-have.


While looking in a rolling file storage drawer for a headset for my grandson to use with his XBox One, I found two stretch headbands that I had purchased some time ago to use specifically to make doll clothes.  I could make a nice dress for Soul with this, I thought. 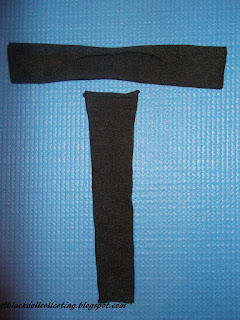 I cut the ends of one of the headbands to a length that would create a full-length dress.  To create a shrug, an opening was cut in the center of the remaining shorter piece.   Soul's arms insert into the center of the opening (one arm at a time) which creates the sleeves of the shrug.  (See the final photos of this post.)

Because her hair had fallen flat over the years, I first tried to fluff it out with a plastic bristle brush. This did nothing to improve the appearance.  My next option was to give her a root job using hair I have saved from each shampoo.  (I now have two snack-size Ziploc bags full of shed hair just waiting to be utilized for a doll.)  Soul became the first candidate.  (Yes, it's my hair.)


Her head is firmer than I thought and would require extra force with the felting needles I use for rooting.  So I decided to glue the hair directly onto her head.  (I could have dipped her head in boiled water to soften the vinyl, but I opted to use glue instead of rooting.)

Using Aleene's Tacky glue, I applied the glue directly on top of Soul's hair and placed several pieces of my hair on top of the glue to create a nice size Afro.

The added hair was formed into the shape of an Afro with my cupped hand before loosely wrapping plastic around the hair to hold it in place while the glue dried.

End Result
Soul models her new hairstyle and clothing in these final photos: 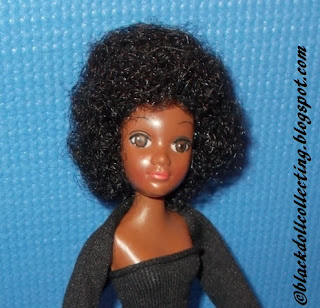 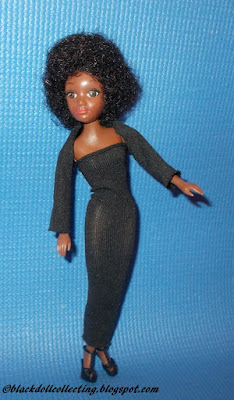 I am loving Soul's new 'do and fashion.  I think she loves it too!

In addition to the original Soul released in 1971, other versions were released in 1973.  One of the 1973 dolls wears the same fashion as the original doll. The only difference I found between the 1971 and 1973 Soul is the packaging.  The latter doll has an inserted flap with full-length illustration of the doll and the box is shrink wrapped; there is no top.  The original version has a cardboard box top with the doll's illustration on the top of the box.  There is also a Deluxe Soul in the company's 1973 catalog which comes with a personalized T shirt and an extra dress-up fashion.  (Navigate to the 1973 World of Love catalog at the link provided at the end of this post.)

I kept this post in draft mode for several days after Soul was restyled because a never removed from box (NRFB) first edition Soul (1971) was listed on eBay with a low beginning bid.  I placed the doll in my eBay watch and continued to watch it until the final seconds.  A few days after placing that doll in my eBay watch, I communicated with another eBay seller about mint in package World of Love fashions.  That seller informed me he had a NRFB Soul (1973, second edition) to sell.  Wow... could this be true?, I wondered.  Because this post has taken on a life of its own, I will post a followup soon.

In the meantime you may view the other World of Love dolls and the many extra fashions that were included in the 1973 catalog at this link.