After learning of her existence, in June I discovered a buy it now eBay auction for the above little cutie, Amosandra by Effanbee. Due to price and rarity, she is one of the most difficult to find black Patsy family dolls.  The buy it now was unbelievably low, so I grabbed her!

In her book, Effanbee Dolls That Touch Your Heart (Collector Books, 1983), Patricia R. Smith documents that Patsy Baby was added to the Patsy family of dolls by Effanbee after Amos and Ruby (of the Amos 'N Andy Show) "gave birth" to Amosandra during the 1936 radio broadcast.  Listeners of the radio show showered the imaginary baby (Amosandra) with gifts, including dolls*.  Effanbee and at least one other known company, Sun Rubber, manufactured Amosandra dolls.  Effanbee used their Patsy Baby mold for their Amosandra.

Smith indicates, "Effanbee made Patsy Baby-kin and Baby Grumpy into a black doll with three tufts of yarn hair."  According to Smith, this doll must be marked Effanbee in order to be authentic, as there were others made by other companies during this time. 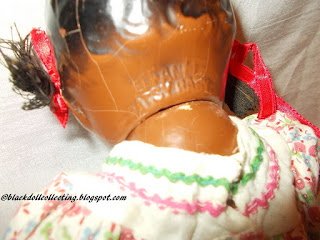 My doll bears the Effanbee Patsy Baby mark on the nape of her neck (shown above) and on the mid back. 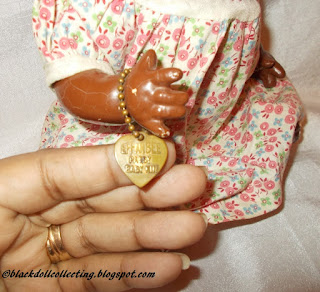 Her heart-shaped wrist tag bears the mark:  Effanbee Patsy Baby-Kin.  She wears an untagged, but period-appropriate dress with matching panties.  The original black embroidery yarn used to create her three tufts of hair is intact.  She has some minor crazing and paint rubs and her stringing is loose. These are all very minor imperfections for an 80-year-old doll.

The Amos 'N Andy characters originated in the late 1920s on a radio broadcast with two white male actors as Amos and Andy who used broken dialect and intonations to portray the southern African American characters.  Freeman Gosden and Charles Correll also appeared in blackface as Amos 'N Andy in public appearances.
Elinor Harriot, a white actress, was the voice of Amos's wife, Ruby.  Harriot is shown in the next two photos with several dolls received from dedicated show listeners after the birth of Amosandra during the 1936 broadcast season.