Brought to my attention by a fellow doll enthusiast (thank you DS), this doll was listed in an eBay auction with a bid at the time I saw her of less than $20.  In my eyes, she was the perfect size for my composition doll collection.  Her too-cute face and her molded curls drew me in as well. The seller described her as a Pasty-type. I do not see the resemblance, other than perhaps the full-body composition style of Effanbee's 11-inch Patsy (a.k.a. Patsy Jr.), as seen here.

She arrived in better-than-expected condition with my germophobe self not needing to do anything except use a dry cloth to wipe off traces of exterior dust.  She wears what appears to be her original dress made of cotton with an attached apron made of silk faille.  (I had to call my mother, and ask, "What is the silk-looking fabric called that is ribbed?  I have a doll from the 1920s.  They used that for the apron of her dress.)  After her answer, I googled "fail silk" and found the correct spelling along with an image to confirm my mother was correct.  (The woman still knows fashion and materials used for it.)

The doll's nylon panties are probably replaced.  The now off-white socks and beige or pale pink shoes are period appropriate.  The toe of the left shoe is a little worn, but I won't bother repairing it, even though I know how.  If they were originally pink, they do not match the color of the dress. 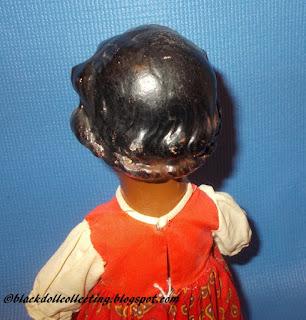 Her molded curls frame her face, the ends of which are flipped up.

After my little girl arrived, I checked my black-doll reference books to see if she had been documented.  She had, but her manufacturer's name and her actual name remain unknown.  On page 132 of Black Dolls an Identification and Value Guide Book II by Myla Perkins, published in 1995 by Collector Books, she is described as "12". Composition Patsy look-alike with molded hair, molded red bow on left side near part in hair, painted italigo eyes, closed mouth, jointed composition arms and legs.  Body is one piece with the head.  Unmarked.  Redressed.  1920-30.  A marked Effanbee doll has the same molded hair."  The doll was given a 1995 value of $150.  I won the auction for $20. 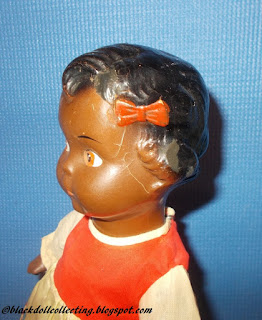 The red bow in my doll's hair confirms that she is the same doll as described and shown on page 132 of Black Dolls an Identification and Value Guide Book II.

My little girl with curls reminds me of a much larger, 27-inch, unmarked composition doll that I refer to as "Girl with curl" because she has a molded curl on the top right side of her head through which a ribbon can be tied.  I have owned the larger doll for several years.  Her identity remains unknown. Prior to publishing this post, because Perkins mentioned that a doll by Effanbee has curls like my little girl with curls, I searched Google, for "Effanbee composition doll with molded curls" and found this image of an unmarked white doll that uses the same head sculpt and apparently body as my larger doll.  The white doll is also 27 inches, but has sleep eyes whereas my doll's eyes are painted. Unfortunately, the white doll's identity and manufacturer were also unknown.

In this close-up of my two composition dolls with curls, my little one's cute face is better illustrated. She reminds me of of an illustrated or animated character that I have seen before, but I cannot recall the character's name.  Maybe this is a figment of my imagination, but I am glad she is here in three-dimensional form to make me smile each time I look at her.  In the final photo, the two are shown together to illustrate their size difference. 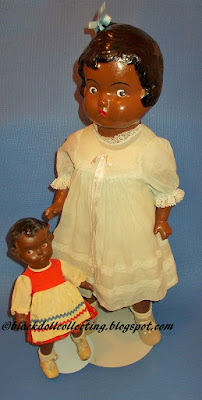 Neither doll was made by Effanbee, whose slogan was, "Effanbee... dolls that touch your heart."
I love them both, but the little one has stolen my heart.