Roddy Black Fashion Doll, Who Am I?


Described by her current owner as a 24-inch doll marked Roddy on the neck, beyond this neither he nor I know more about this gorgeous, circa 1960s fashion doll. 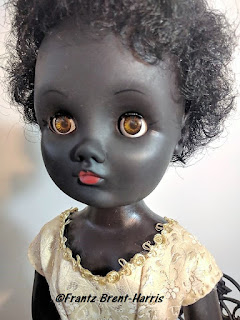 We both agree that her lovely face is very reminiscent of Cissy by Madame Alexander.  However, she is a few inches taller than Cissy and her joints are isolated to the usual five areas; neck, arm, and leg sockets.  She has brown sleep eyes and short black rooted hair that is curly. 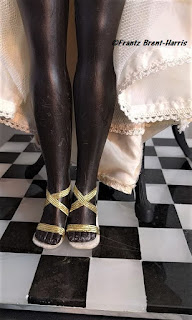 This lovely black fashion doll has high-heel feet and very shapely legs as illustrated in the above photograph. 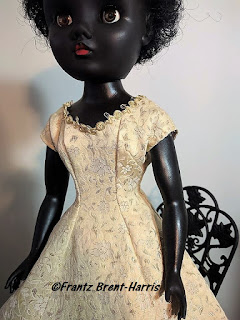 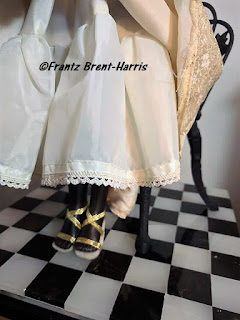 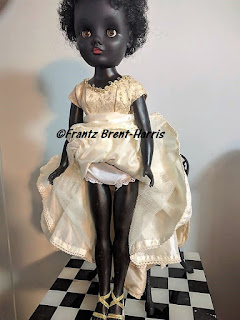 The dress, slip, undies, and shoes appear to be original.

Roddy was a British doll company, described as follows in the book, British Dolls of the 1960s by Susan Brewer:

"Roddy
This trademark was used by D.G. Todd and Company, founded after the Second World War, and based in Southport, Lancashire [England], though Daniel Todd had been managing director of a Southport toy company since the 1930s. Famed in the 1950s for its comprehensive range of Roddy dolls, it continued well into the 1960s before changing its name in 1969... The Roddy dolls were sold in 14/15-inch and 19-inch sizes, and were usually marked on the back of the neck. They came with a variety of rooted hair styles, and some featured jointed waists and painted nails. Roddy teens wore a selection of in-vogue styles, with plenty of full skirts, duster coats and posh evening gowns; the early 1960s’ dolls had names such as Kym and Cindy, and, as with most of the various manufacturers’ ranges, included a beautiful Bride doll dressed in white satin with a net veil."

I viewed a sample of the above-named book prior to purchasing the eBook, wherein pictures of a Roddy doll like the doll in question were not found, unfortunately.  I also reached out to the author with a photo to request identification help, but have not received a response.  So I am reaching out to readers in hopes that someone knows the doll's name, the exact year she was made, and whether or not her clothing and shoes are original. 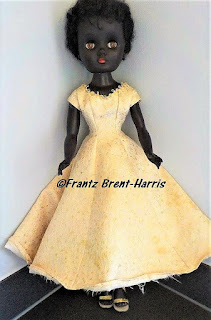 Please add a comment if you know this gorgeous black beauty's name or can provide information that can lead to uncovering additional information about her.  Thank you in advance.

Thank you for following this blog, for reading the posts, and for your comments. If you are not already a subscriber, go to the homepage. If the right sidebar is not visible, scroll to the bottom and click "desktop view," locate and click "subscribe to posts." Optionally, also subscribe to comments. There is also an email subscription box for those who would like to receive posts by email.

Where to Buy Black Dolls

This post includes a list of companies and websites in alphabetical order that sell black dolls and other dolls of color suitable for ...