After repairing the 9-inch Topsy, shown above in the rust-colored romper and introducing her to other circa 1930s composition Topsy dolls that are displayed in a doll baby bed, I noticed a couple of other dolls that needed my attention.

A crazed head (lifted composition) was one doll's issue.  Another doll had been poorly repaired by a previous owner.  Crazed areas had not been filled in on the second doll; these and other areas on the doll's hands, body, and legs had been painted a brown color that did not match the original brown paint.  Additionally, this doll was not an authentic Topsy.

I did not take pictures immediately before the repairs of either doll because this post about their repairs was not planned.  I was able to find some vintage before photos of the dolls to share.

The First Doll Patient
The 9-inch Topsy in the peach gingham dress arrived in the late 1990s to early-2000s with some head crazing and minor crazing on the sides of the face.  The head crazing had progressed as shown in the first photo of this post where the head looked like a case of vitiligo.

The crazed areas were almost crater-like.  These were filled in using several layers of Mod Podge until the areas were even with the original surface of the head.  After the Mod Podge dried completely, I painted the entire head black.  The lightly crazed areas of the face were filled-in and painted with a mixture of acrylic brown paints that match the doll's original complexion.  I repainted the eyes and sealed the dried paint with satin finish liquid varnish that was applied with wedge make-up sponges.  Most of the painting was done with the sponge wedges, too. Paint brushes or toothpicks were used for detailed painting of small areas.  As a final touch, I gave her new ribbons for her hair.

Below are several after photos of this little girl now. 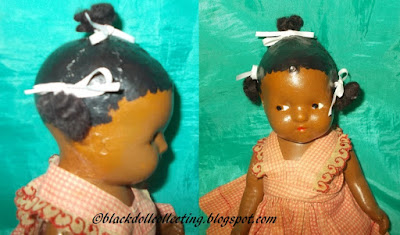 
This doll had been made into a Topsy by a former owner who took the liberty to shoddily drill three large holes into the doll's head and add a few pieces of embroidery thread into each.  While performing the minor fill-ins of this doll's crazed areas (mostly on the head) and repainting the entire doll an even color, I decided to remove the embroidery thread from the head and fill in the holes with air-dry clay to restore her to her original molded/painted hairstyle.  After painting, satin finish liquid varnish sealed the paint.  Photos of how she looks now are shared below.


I used a men's crew sock to make a pair of undies for the baby to prevent most of her body from showing through the dress.


I think she looks much better without the Topsy braids and her now even coloring also adds to her appeal.

There are countless items to collect and write about. Black dolls chose me.