I am not quite sure what fuels my love for the Keisha line of dolls, but I clearly remain enthused about them.  Perhaps the fact that they were created by an African American woman (a decade before I began collecting dolls); and the fact that had I known about the dolls, I would have certainly purchased at least one for my daughter are the reasons for my Keisha enthusiasm.

My first Keisha was purchased during the 1990s (Cleopatra A).  I had said I would stop buying them after the third one was purchased (Ashanti I), but along came the fourth (Ashanti II).  Then I saw this one dressed in everyday clothing on eBay and couldn't resist making the seller an offer that she did not refuse.

This is my first Keisha that is not in costume to represent a historic African American female.  That is probably another reason I wanted her. My other four represent two versions of Cleopatra and two versions of Ashanti.

So this doll is just Keisha, made by the Keisha Doll Co. by a former school teacher, Helen J. Steward.  Ms. Steward often named the dolls that did not represent historic figures after students; and because Keisha was a common name at the time, she decided to use that as the name for the company and for the original doll.  It is possible that she gave this one a name other than Keisha, too.

The head is marked Keisha II/©H.J.S 1983/008695.  Like the others, she is all-vinyl and stands 24 inches tall.  She has mounds of closely rooted black curly hair and brown sleep eyes.  She arrived wearing a long-sleeved red turtleneck top, blue denim pants, and white knit socks. 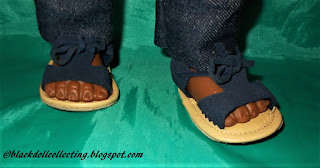 I removed the socks and added navy blue faux suede sandals.  (I found these "newborn" size sandals in my My Twinn stash of doll shoes.) 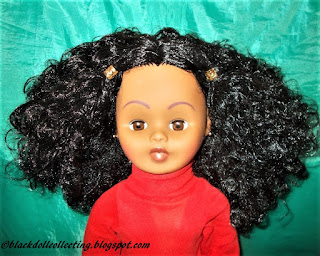 Like the others, she now has pierced ears to which I have added gold stud earrings.  I also added two gold hair ornaments to her hair.  I might add more of the same hair ornaments later.  For now, the two will do.


More information about the Keisha Doll Company is included in one of my earlier posts about my first two Keisha dolls and can be read here.

Other Related Links:
Sandals for Ashanti Keisha
Cleopatra B Joins Ashanti and Cleopatra A Keisha
Who Mails a Doll in an Envelope (Ashanti II Keisha)