Black Dolls From Around the World - Russia 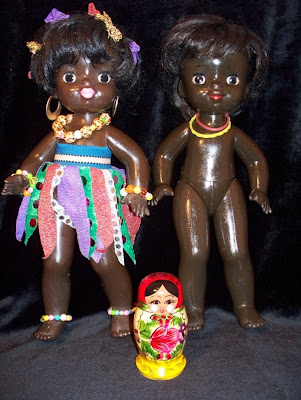 The rigid vinyl dolls from Russia are 14 inches tall.  They are identical except for lip color and the tribal-type clothing worn by the one on the left.  I acquired them from a Russian eBay seller several years ago.  Lenigruska is the name of the factory that manufactured these dolls in Leningrad, Russia (now known as Saint Petersburg, Russia). The doll on the right was the auctioned item.  After the doll arrived, I voiced great displeasure with the seller about the doll's condition.  It has several tiny scratches on its vinyl surface, which were not described in the item description nor visible in the auction images.  The seller sent the second doll as a "peace offering."

(matryoshkas/matrioshkas) shown above were made in Russia.  Un-nested, they consist of five dolls ranging from 1/2 to 4-1/2 inches tall.  Their accompanying literature reads:

The art of producing hand-painted Matrioshkas began in the 17th Century in Sergiev Posad, Russia and later spread to Moscow, Semenovo, Polohov-maidan, Tver and other regions. 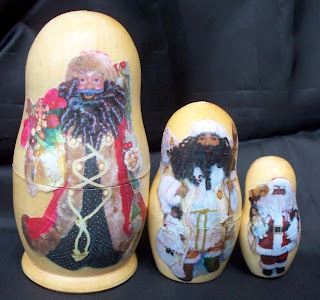 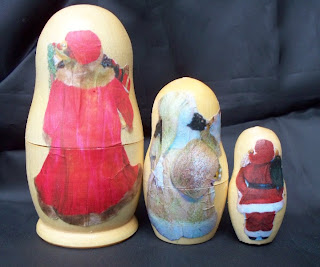 My collection of black matryoshka's remains at a standstill of three sets total.