Black Dolls From Around the World - People's Republic of China 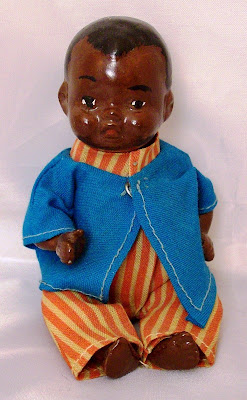 My made-of-China baby is 5-inches and has a jointed head, arms, and legs.  His jacket is tagged "MADE IN HONG KONG." 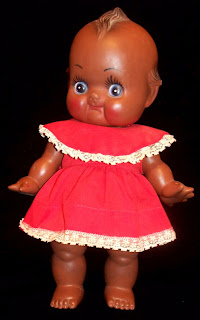 The above all-vinyl, jointed, 14-inch Kewpie-type doll was made in Taiwan, circa 1960s.

Now, fast forward five decades after the Kewpie-type was made to the need to locate more recent black dolls made in China.  This prompted a Google.com search.  In the search results, I found an interesting Blythe-type doll distributed by Shanghai Huasheng Plastic and Produces Co., Ltd., which is located in China.  I need her, but the minimum order is 200 pieces.  Oh well. 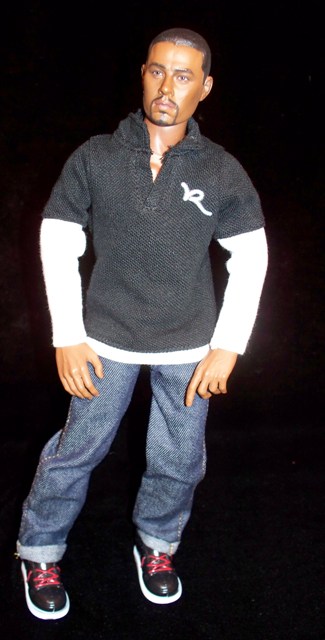 Hot Toys, whose main facility is in Hong Kong, is a manufacturer of lifelike 1/6 scale figures (that some consider dolls).  Favorites by them include my Terrence Howard lookalike, pictured above, recently dressed in my duplicate, deboxed S.I.S. Darren's Rocawear gear.  The discovery that Darren's jeans barely close in the back was a surprise.  "Terrence" has "back."


Most Hot Toys Michael Jackson figures are favored, except I'm not too "hot" for the "Thriller" face...

...and while I'm not a Wesley Snipes fan, their Blade II figure of the character he portrayed in the movie by the same name, mirrors the actor's likeness (no image available).

Hot Toys Limited has offered a host of other dark-skinned, 1/6 scale male figures in the past.  I look forward to salivating and coveting their future male offerings.  I remain hopeful that my request for a TrueType AA female figure with a fierce afro will be realized... soon.  It never hurts to ask or pester. 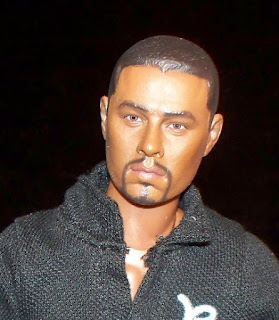 In the meantime, I'll make do with my TrueType African American Slim Figure (Terrence).


dbg
Posted by Black Doll Enthusiast at 7:06 AM

I love the Hot Toys guys. Each one has a different look - not one face-mold fits all. There's another AA guy who has a darker complexion and a modified afro.