Black Dolls From Around the World - Germany (Antique) 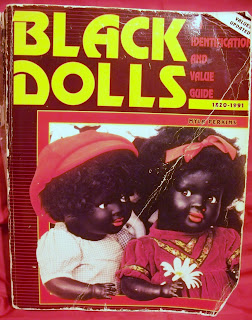 Germany, known as the center of the toy-making industry, is well-known for making beautiful black (a.k.a. brown and mulatto) dolls dating back to the 1800s or earlier.  A beautiful example of two German dolls by Konig and Wernicke grace the tattered cover of my second copy (the first one is even more tattered) of Black Dolls an Identification and Value Guide 1820-1991 by Myla Perkins.  Perkins describes this pair as, "Adorable flirty-eyed toddler boy and girl with Negroid features.  18" tall.  Bisque heads, dark brown flirty eyes, open mouth with two glass upper teeth, curly synthetic wig.  Composition five-piece toddler bodies.  Made during the first quarter of the twentieth century.  Marks:  K W/g/734/72/(crossed nails), on head." 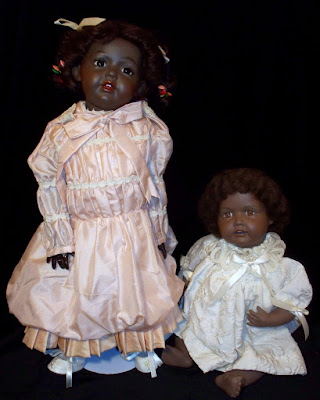 J. D. Kestner, Jr. of  Waltershausen, Thuringia, Germany began making dolls as early as 1820.  Two reproduction Kestner Hildas are illustrated above.  A beautiful version of an original 16-inch black Hilda and several other antique black dolls made in Germany  An original black Hilda and links to other antique German dolls can be seen at the following links.

Germany remains steadfast in the manufacture of beautiful dolls representing all ethnicities. Their modern play line and artist dolls rank high in quality and are desired globally by parents for their children and by collectors for their collections. Examples of these will be included in the next post.