In 2002, a former coworker gave me these souvenir water bottles on two separate occasions. They are made in the likeness of then WNBA Houston Comets players Sheryl Swoopes and Tina Thompson. Both stand 10 inches tall.

Tina's bottle is the first water bottle created by Jazzwares, Inc. for the WNBA in a limited edition of 5000. It was issued on July 25, 2002, at the Comets vs. Miami Sol game, won by the Comets 69-60. Tina holds a Sears breast cancer awareness pink and white ball.

Swoopes' water bottle is also from 2002 but was a different ball game giveaway. Swoopes holds a molded basketball.

The removable tops of each contain a plastic straw.   Below is a view from the back: 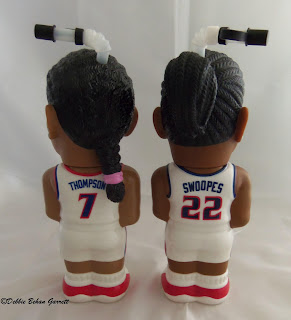 While they are water bottles and not dolls, my former coworker thought I would appreciate owning them.  She was correct.

Follow my Dolls for Sale blog
Posted by Black Doll Enthusiast at 4:00 AM