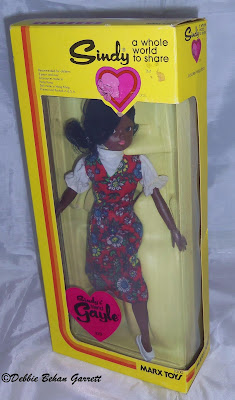 Gayle is an 11-inch fashion doll distributed in the US by Louis Marx in 1978. Gayle's friend Sindy originated in England in the 1960s, manufactured by Pedigree but was later distributed in the US by Marx. The 1970s Sindy and Gayle share the same sculpt. Pedigree also made dark-skinned Sindys for the British market. Active Sindy was an articulated ballerina.  A non-articulated Sindy is shown here.  Gayle was sold exclusively in the US.

Without their original clothes and original hairstyles, black Sindy and Gayle will look alike.  Made in England is marked on the Pedigree dolls (if there are other marks, I am unaware of those).  As documented in Black Dolls an Identification and Value Guide 1820-1991):

The body marks are:
Made in
Hong Kong

Sindy and Gayle remain popular, but dark skinned Sindy's are the most popular and highly sought.   Gayle holds her own with reference to value and price commanded on the secondary market.  I have had my 1978 Gayle since the late 1990s and paid $75 for her then.  I recently reconnected with the doll while looking for my Mego Diana Ross.

Sindy is said to be England's answer to Barbie, but she and Gayle remind me more of Ideal's Tammy.  Perhaps Tammy is America's answer to Sindy.

More info on Sindy and Gayle dolls that were made for the American market can be read here.