The doll is a 5-1/2-inch Nancy Ann Storybook (NASB) Doll, circa 1948-1950. Her name is Topsy, based on the young slave girl in Harriet Beecher Stowe's classic book, Uncle Tom's Cabin. 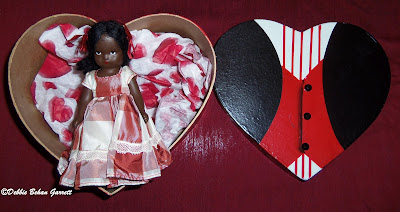 First published in 1852 as an antislavery text, Stowe, an abolitionist, is said to have intentionally created stereotypical characters to expose the evils of slavery.  Topsy is an incorrigible, young servant, purchased as a "gift" for a woman who despises her because she is black.  Topsy's new owner refused to touch her for the same reason, the color of her skin; it is unnerving to her.  Poor Topsy doesn't know how to love and believes, because of the mistreatment she has endured throughout her life, that it is impossible for a black person to be loved.  She is eventually "delivered" from this belief the moment the young white mistress, Eva, "touches" her and tells Topsy she loves her.  Eva's mere touch cures Topsy of her waywardness.  When Eva dies, Topsy is heartbroken.

Topsy, the doll, arrived in a Valentine-shaped box (used only as a gift box; it is not original to the doll).  The top of the box is painted to look like a men's vested suit.  The doll wears her original rust and white, block-check taffeta dress, white pantaloons, and painted-on black shoes.  Initially, I thought my doll was one of the original bisque, 1930s storybook dolls that the founder of the company, Nancy Ann Abbott, made.

Abbott's original, 1930s storybook dolls were bisque with painted eyes and were similar in appearance to my 1948 doll, which was fashioned to look like her original dolls.

Other hard plastic, dark skinned NASB versions from the late 1940s-1950s were made with sleep eyes like the one I referenced in Black Dolls A Comprehensive Guide to Celebrating, Collecting, and Experiencing the Passion.


In addition to their different eyes, my Valentine's doll and my first hard plastic Topsy (shown above), have different head sculpts. At the time of this writing, I do not own an original black bisque NASB doll, but would like to eventually.

Other dark skinned NASB dolls, circa 1930s through 1950s include, and are possibly limited to:
The dolls shown at the two previous links are made of bisque.   As illustrated at these links, the fabric used for their dresses varied throughout the years.  Use was probably based on availability.  Mammy and Baby are harder to find today and usually are quite costly.   Topsy and Eva together command top dollar, too.  I have no plans nor desire to own either of these sets.


The Nigerian Nancy Ann doll, shown above, is made of plastic.  This more recent dark-skinned Nancy Ann doll was manufactured by the Bourla Company and may be part of an international doll series.

Albert Bourla acquired the original NASB company during the 1960s following Ms. Abbott's death and the company's subsequent state of bankruptcy.  I discovered the Nigerian doll while doing research for this post and purchased it in a buy it now auction the day prior to publishing.  The Bourla dolls, made in Hong Kong, are said to be inferior in quality to the original dolls.  I will know for myself within a few days.

Bourla sold his company in 2003 to sisters, Claudette Buehler and Darlene Budd. Their dolls are designed by Dianna Effner.  The first ones were produced in 2005.  I do not own any of the sisters' dolls.  To date none are dark skinned.

For more information on Topsy dolls that were manufactured by other companies click here and here.

Follow my Dolls for Sale blog
Posted by Black Doll Enthusiast at 12:01 AM

Thank you Limbe Dolls for reading it. I'm glad you found it informative. I learned/rediscovered a few things about the original NASB company, the dolls, Harriet Beecher Stowe, and her book Uncle Tom's Cabin, while writing this post.

I also realize why I love Topsy so -- she couldn't love herself because she was convinced she was worthless because of her skin color, but that is the very reason I love her and the countless other real Topsies who endured such painful and miserable lives who are responsible in part for my being here today.

Thanks. That was great information. I didn't know of either doll prior to reading this. Love is such a powerful gift.

Glad you enjoyed, Vanessa. Topsy was a gift from my "bestest" doll friend. But you're right, love in any form is a powerful gift.

Husband gave me the usual -- a card, candy, and a dozen lavender roses.

Lavender roses from Husband are not the norm; they are usually red.

I remember Topsy when I was little girl. A neighbor had her doll and she wouldn't let me touch it, she was her most prized possession. I remember being so mad and I went home and told my daddy and of course my father just laughed. I remember him saying, "Now you know how your sister feels, you won't even let her breath on your Barbies!" Thanks for the links.

Just found this post while looking up Nancy Ann dolls. Thank you for such an informative and interesting post.

I am glad you stumbled upon this post and found it informative and interesting. Thank you for taking the time to comment.

Randomly stumbled upon this blog....pretty informative! I'm pretty sure I found an original.....hard to tell but she has what appears to be original safety pins that hold her clothes on, bisque made, jointed together with old rubber bands similar to the photographs I've viewed online...her back has an imprint of Story Book Dolls USA 11.....anyone know if this could be a real Topsy?

Based on your doll's marks, she is a NASB doll. The black ones were either Topsy or Mammy. The clothing, if original, will determine which one you have.