I looked in my collection for an East Indian-looking male doll and rediscovered Jordan by Integrity Toys (IT).

I found Jordan alone with bare feet at a thrift store, circa 2008.   Except for being by IT, at the time he entered the collection, I didn't know his manufactured name. I wrote IT who informed he is from the Janay and Jordan Royal Heritage Wedding Gift Set, 2000.  Until this morning, he had been displayed with a group of female fashion dolls.

When I removed him from the surrounding ladies, I discovered his loose left leg.  I examined and diagnosed him with a fracture/dislocation of  the left femoral head.  (The hip knob that inserts into the leg socket had broken off and lodged into the socket.)   As an alternative to glue, I used Silly Putty to provide stability and maintain desired movement.

I took photos of the process: 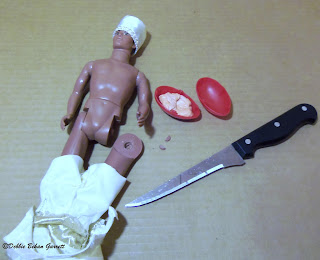 Using a steak knife, I removed the broken knob that had lodged into the leg socket. 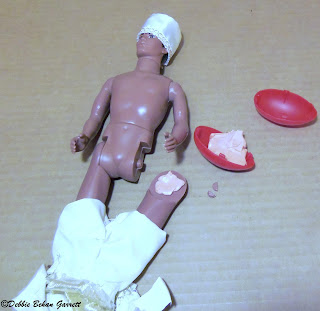 A dab of Silly Putty was pressed over the socket and around the outer diameter to act as an adhesive cushion (joint cartilage). 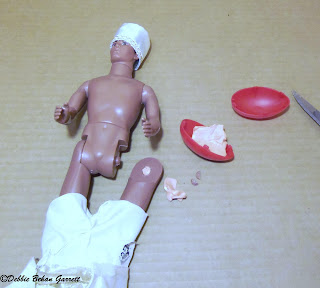 The leg with Silly Putty applied was then pressed against the body's remaining knob to embed the Silly Putty into the leg socket.  Next, the excess Silly Putty was removed. 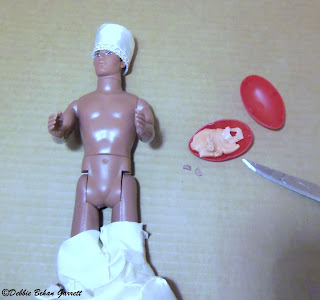 The leg was pressed against the body.  Proper alignment and good range of movement was noted.

Jordan was allowed to recover from the general anesthesia that was administered immediately prior to the procedure.  After recovering, he redressed and was given the Silly Putty to have on hand in the event the joint loosens again.
~~~~~
The title of this post mentions glue; however, as noted above, glue was not used for Jordan's procedure.  Instead, I used Silly Putty to perform the fixation.

~~~~~﻿
Before the procedure, I located a pair of white Ken shoes for Jordan with plans to cover his bare feet with them.  Enclosed inside the plastic bag with the white shoes  were brown braided sandals made by Paulette of Limbe Dolls.  I decided Jordan would appreciate wearing sandals in his postoperative period a lot more than those boring white loafers.


~~~~~﻿
I hope none of your dolls incur fracture/dislocations like Jordan did, but if they do; try using Silly Putty as a quick temporary fix.

If your dolls or action figures have bare feet that need covering and you'd like to try your hand at making gladiator sandals like Jordan's, watch the Limbe Doll's tutorial below.

Follow my Dolls for Sale blog
Posted by Black Doll Enthusiast at 4:00 PM