I See the Family Resemblance 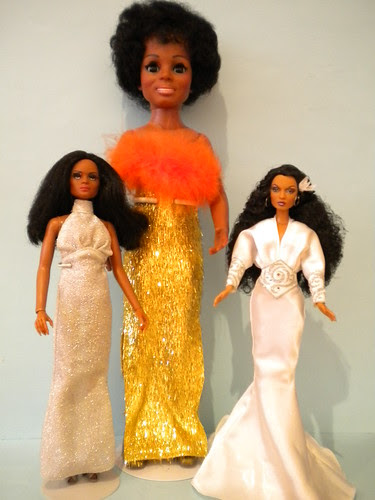 L-R:  Diana Ross dolls by Mego (1977), Ideal (1969), and Mattel (2003) -- the Mattel doll captures her likeness the best.  I have this trio, but could only locate two.  I looked high and low for my Mego Diana Ross; my doll room is in a shambles as a result, and I still have not located my doll.  The image is courtesy of Flickr's share feature.
No, this post is not about Diana Ross.  It's about her sister, Dr. Barbara Ross-Lee, the first African American woman to be appointed dean of an American medical school.  Read more about Dr. Ross-Lee at the following link that was shared on my WLBDSister list on October 20, 2011, by Ruth Manning.  It was her final post on the sister list.  She was still using the signature, "Healed by His Stripes." (I am confident and comforted in knowing she is now healed, just no longer with us.)
http://www.nlm.nih.gov/changingthefaceofmedicine/physicians/biography_279.html
Below is a link to more information with an updated image of this Dr. Ross-Lee, a history maker:
Dr. Barbara-Ross Lee - Biography
In the next few days or until the end of the month, whichever comes first, I'll be sharing images of dolls rediscovered during my search for my Mego Ross.  Where is that darn doll????
dbg
Follow my Dolls for Sale blog
Posted by Black Doll Enthusiast at 1:01 PM

I learn something new every day. I never knew that about Diana Ross's sister.

Thank you, Montse. The one by Ideal is one of my favorites.

This was news to me, too.

That Mepo doll heard you bad mouthing her on Male Doll World Website. She probably left. Are you missing a doll suitcase, too. Girlfriends has flown the coup.

Thanks for the info about Diana's sister. Hard to imagine she even has a sister. I wonder how they got along growing up.

LOL... you think Diana has flown the coop, huh? I wouldn't blame her. I guess she could sense that I really don't care for her.

I can imagine the two sisters might have been rivals, but maybe they were/are actually close.

Thank you for the informative post about Dr. Barbara Ross Lee. I think it is a testament to their family upbringing that both Diana and Barbara became superstars in their respective fields. Hats off to their mother!

I like mattel one, I'm looking for her for my collection but too expensive at this moment. I hope you find it.

If I ever decide to sell my Mattel Diana, I'll let you know.

That would be my "extra" Mattel Diana. I have two.