I received the following e-mail inquiry from a Black Doll-E-Zine subscriber.

Hello All, [does] anyone have any information on Alberta Bell who was a Black Doll Artist out of Chicago? I believe she was a member of UFDC. Thank you in advance for any info you can give me.

Thanks for writing me and prompting me to do mini research based on your question about "Alberta Bell" dolls. I knew the name rang a bell. Last night I conducted a cursory search for information about her before retiring to bed, but the results were unfruitful.


With dolls constantly on my mind and always wanting to increase my black-doll and black-doll artist knowledge, I woke up thinking about the Bell dolls and recalled having seen dolls by Roberta Bell and hearing Barbara Whiteman of the Philadelphia Doll Museum speak about her dolls.

This morning, I sadly discovered that the Philadelphia Doll Museum's website is no longer online. I was going to share the link to it with you because I believe some of Bell's dolls were featured on the website.


Some of Mrs. Bell's dolls are featured in Black Dolls an Identification and Value Guide Book II by Myla Perkins, Collector Books, 1995. The artist is listed as "I. Roberta Bell" in Perkins' book. 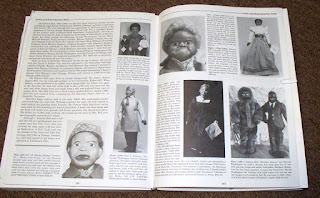 After sending my initial reply to the BDE subscriber, in an effort to preserve and impart black-doll history, I took the "liberty" of photographing two pages from Ms. Perkins' book, which illustrate additional Bell dolls (see above image).

According to Perkin's book II,


Ida Roberta Bell, 1904-1992, was the first black American elected into the prestigious organization of doll artists, NIADA, (National Institute of American Doll Artists).  She was inducted into the organization in 1970 as a result of the excellence of her Dr. George Washington Carver doll...

Bell was born in Nashville, Tennessee... and moved with her family to Kansas City... where she received her formal education.  She became an educator and retired from Chicago, public schools in 1969.

Bell came from an artistic background.  Her father and brother were artists and sculptors.  When Roberta... was a young child, her father was upset at the fact that she had only white dolls to play with and once removed the pink and white bisque head and hands from a doll and sculpted black ones to replace them.

Bell first began making dolls in the early 1940s.  She used paper-mâché, oven-hardening clay, and cloth.  Wanting to perfect her craft, she took classes in mold making and painting facial features.  Her famous black Americans series were made by first modeling the head in plastilene.  A mold was then made and the head and hands were poured with brown porcelain slip.  The bodies are stuffed with sawdust.  All costuming was done by Mrs. Bell and was thoroughly researched for detail.

To quote Ms. Whiteman, from an online article (no longer accessible at previous URL link),


Whether for reasons of cost, the negative racial stereotypes presented in some manufactured dolls, or the fact that often black dolls were just an afterthought to white dolls, many blacks made their own dolls.


I honor trailblazers like I. Roberta Bell, her predecessors, and the modern-day doll artists, who recognize the need for accurate portrayal of African Americans in doll form.

Update (12/28/2014) - The Philadelphia Doll Museum's website is back online.  I. Roberta Bell's well-known African American Historical Dolls owned by the museum can be seen at their website here.

dbg
Posted by Black Doll Enthusiast at 10:50 AM