The Votes are In! 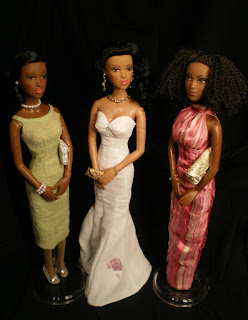 L-R Pretty as Is™ Ivy, Ivy Rose, and Rose

The poll closed this morning for the Pretty As Is™  dolls created by Madame Alexander exclusively for the Sisterhood Boutique.  Votes were for the favorite individual doll and for the combined trio.  The results are as follows:

Individually, Ivy and Rose are faves, but most voters favor the trio as a whole!

Additional information about this collection:  Dolls have been produced as limited editions, only 300 pieces each.  According to the Sisterhood Boutique's recent newsletter, they are celebrating their one-year anniversary (post creation of their first Ivy Rose doll, which is now sold out!)  The newsletter further states, "All orders placed for the Pretty As Is™ collection prior to Dec. 14, 2009 will be shipped from The Sisterhood Boutique™ between December 15 - December 22, 2009, for a Christmas Delivery."

dbg
Posted by Black Doll Enthusiast at 7:46 AM